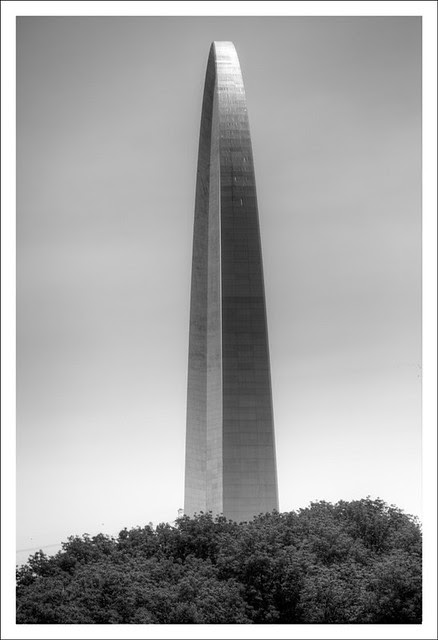 This one isn't bad - nice and crisp, good tonal range - but it's one of the same old views. It was shot from the pedestrian walkway on Eads Bridge, as have many others in the past. I think I'll make this series occasional, posting when my eyes and brain find something that's different. More night work is a possibility.

By the way, this is a 5-image HDR. Photomatix 4.2 makes less lurid HDRs than older versions and the camera body I'm using these days will bracket five shots for HDR rather than three.
Posted by Bob Crowe at 12:01 AM

I have learned so many thing with your caption and the photo is just great!

It looks like the handle on a bushy basket Bob..I can see how it would become sort of a challenge to find an angle that you yourself likes, but me, I've appreciated the beauty in every one so far! Maybe what you need to do is try taking the shot standing on your head in the classic feet against wall yoga position!! I look forward to that one haha!

You can also think along the lines of different seasons, for example, fall colours with the Arch in the background.

Night will do nicely. Same thing with early at dawn. Yes, I know, no one should be awake before eight in the morning...

I agree with PerthDailyPhoto.

It's old to you but new to me. Love it.
Interesting what HDR has got up to.

I don't think I have ever shot an HDR photo. But it looks good on monochrome here.