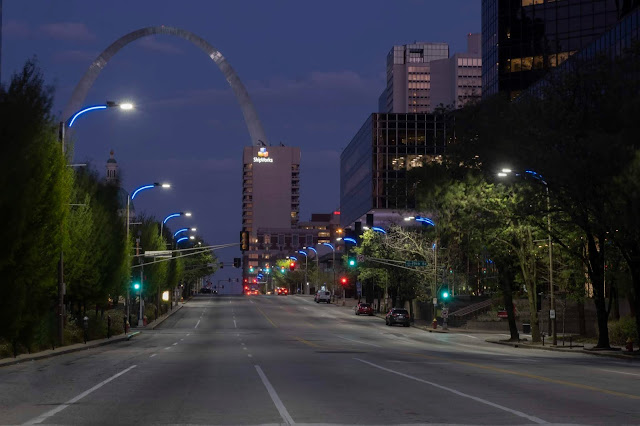 I didn't see anything about it in the national news but there was a meme going around yesterday of lighting up things in blue in honor of health care providers. Downtown had new street lights installed recently. The stems can be lit in any variety of colors and patterns so they were with the program. The Arch was not.

It was very quiet downtown. As you can see, my tripod and I were in the middle of a traffic lane. A bit more of this to come.
Posted by Bob Crowe at 12:01 AM No comments:

ANYONE KNOW WHAT THIS IS? 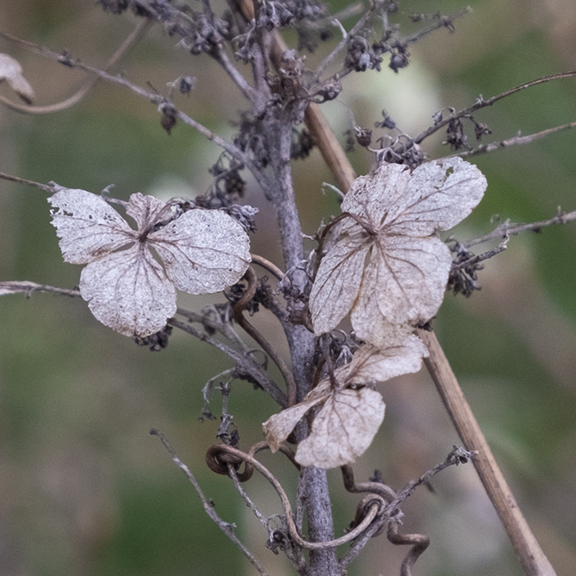 We live in a residential area that has little to look at on a walk but other suburban houses. There is a park quite nearby, though. It's got a baseball field and a playground but the rest of it is made up of rolling lawns and groves of trees. No developed walking paths. If I have to get out of the house (and it's getting to me more and more) it is a pretty, quiet place to go.

I never leave home without a camera these days, collecting whatever crosses my path. This plant was in the park. I don't know if we are looking at leaves or flowers but they are visually striking. The normal ground covering where I grew up was asphalt and concrete. Can anyone help identify this plant?
Posted by Bob Crowe at 12:01 AM 1 comment:

A LITTLE LESS THAN TWO METERS FOR MOST OF YOU 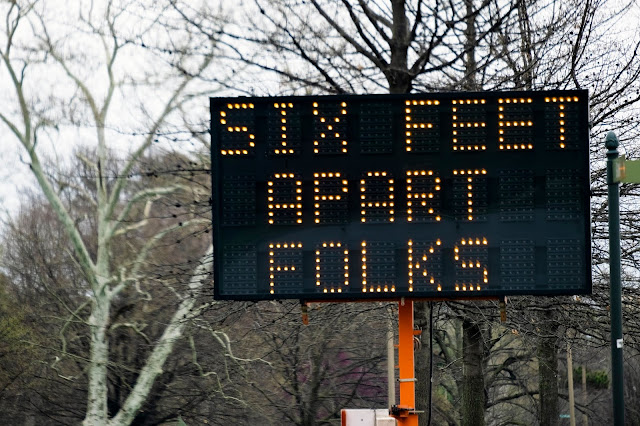 A sign in Forest Park. The city closed some roads in the parks to car traffic where too many people were congregating too closely. Otherwise, the parks are open for walking, running and biking. St. Louis County, which is a separate political entity, closed its parks altogether. That may be a bit over the top.

The occasional rant: it's so stupid that this country, and it alone, has not adopted the metric system. Why? For starters, we're a bit geographically isolated. We have only two international land borders. Canada has 10% of our population so we often ignore it. Mexico is held in contempt by our national administration (why else the wall?). Too many Americans think of Mexicans as purveyors of burritos and tequila, non-union construction workers and gardeners. It's systemic racism. Everybody else is a good sized plane ride away. So here we are - big, a bit off to ourselves and not giving a damn. We don't have to.
Posted by Bob Crowe at 12:01 AM 1 comment: 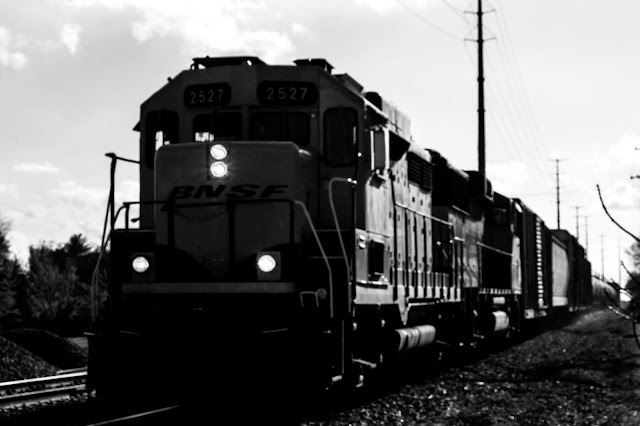 The Midwest is criss crossed by train tracks. It's almost all freight. We can get to Kansas City and Chicago from here by rail but it's so slow that you're better off driving. The freight  tracks run right through our town.

Even with our not-so-strict rules, I'm tired of sitting at home. Went out for a walk yesterday afternoon and had the luck of finding tons of metal crossing one of our main streets.

The reference in the title is to some music from a long time ago. Listen to https://youtu.be/wX9muArmeFg , and pay attention to Ginger Baker's drumming.
Posted by Bob Crowe at 12:01 AM No comments:

GRADING ON THE CURVE 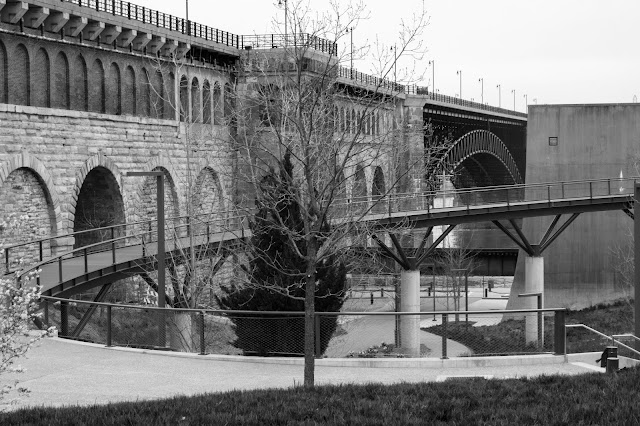 Hardly anyone out. Almost alone when I went to the newish north side of the Arch's park, which replaced a parking garage (which was convenient and cheap). I mostly don't like the new design but I think this corner is interesting, with its curved ramp and the many arches of Eads Bridge.
Posted by Bob Crowe at 12:05 AM No comments: 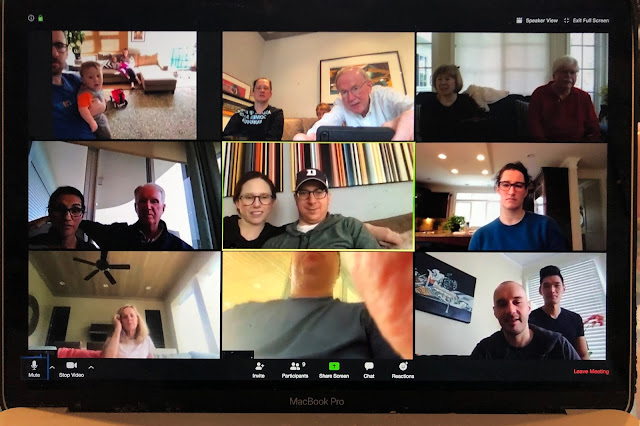 Not specific to St. Louis but anyway...

Families don't get to spend time together these days. My family is spread across the country anyway. One of my intelligent relations organized a family get-together on Zoom yesterday. Three months ago I had never heard of Zoom. We got people on there from Manhattan to San Francisco. By the time we had finished yakking the meeting had devolved into cocktail hour. Oh, and everyone is well.
Posted by Bob Crowe at 12:01 AM No comments:

WHEN YOUR OPTIONS ARE LIMITED 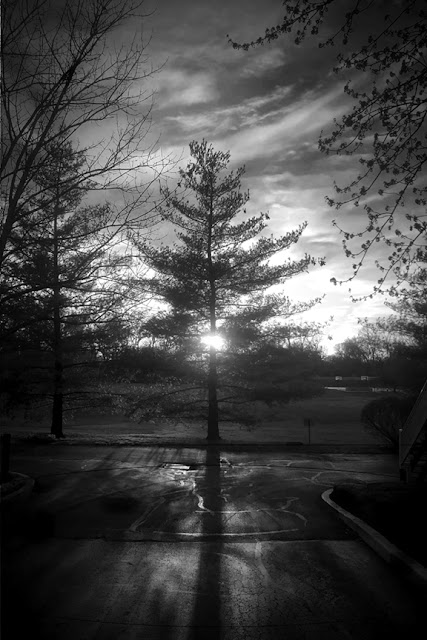 There's a sort of dopey saying that if life gives you lemons, make lemonade. Life hasn't given me Covid 19 as of this writing but it's not doing any good for mobility. The blog is a hungry beast and I need images to feed it. Look more carefully. This is just my neighborhood, with the sunset making a convenient St. Louis-henge.
Posted by Bob Crowe at 12:01 AM 3 comments: