Another Day In Gotham 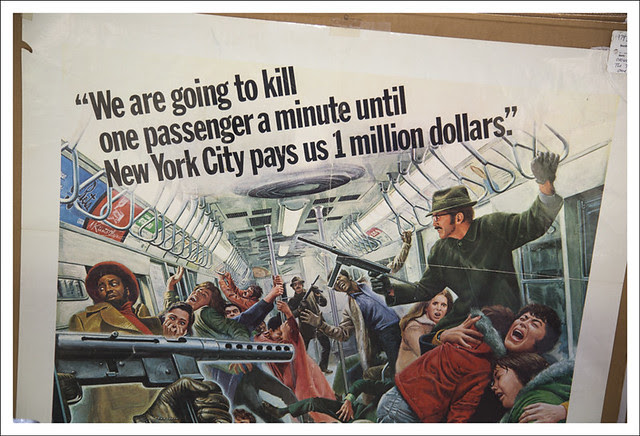 I bet the people in the next car never even noticed. So where are they supposed to be, in a tunnel (it's never too long until the next stop) or a station? Did they mug the conductor so they could lock the doors shut? What's with the Robin Hood meets dirty old man outfits? This poster I saw at the Gypsy Caravan must have been for an old movie. You can tell - no latter day New Yorker in his/her right mind would ask for a sum as trivial as one million dollars. Donald Trump would fire them.

That's it for the Gypsy Caravan unless I run out of new material down the line. There is a set with all I've edited, many of which were not on the blog, at http://www.flickr.com/photos/bobcrowe/sets/72157629975865922/ . Tomorrow we start looking at a lot of people who like to pretend they're in central France 500 years ago, and their pals who like to drink with them.
Posted by Bob Crowe at 12:01 AM

Great print. Americana in the tradition of Norman Rockwell but with a little twist. Funny find.

Haha! love you wordage here Bob pffft! 1 million dollars, pocket money!! Would love to know which old movie this was the promotion for and how long ago! Intrigued to see what these people are going to look like tomorrow.

I think it's the Taking of Pelham 123, which was an early seventies film starring Robert Shaw.

You've always got such character in your shots...and of course your comments. :) Good to see your stuff again.