AND YOU'RE WORRIED ABOUT LOCUSTS 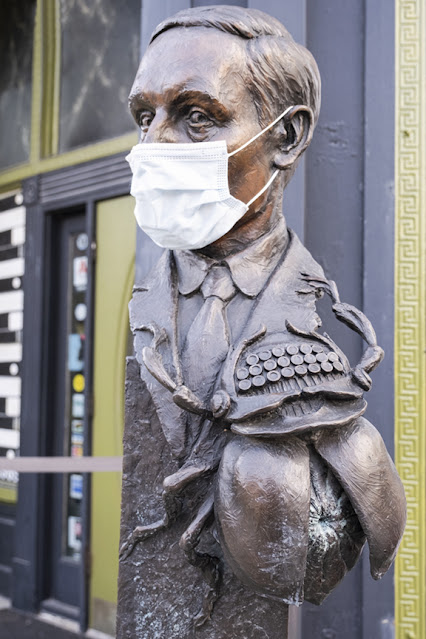 The eastern half of the United States is about to be infested by the 17 year locust explosion. Home town boy William S. Burroughs, https://en.wikipedia.org/wiki/William_S._Burroughs, has other bugs to worry about, possibly from all those things he self-injected. At least he is protected from substances in the air.

His bust is in the Central West End, across the street from that of a much better behaved but no less revolutionary native writer. T. S. Elliott. 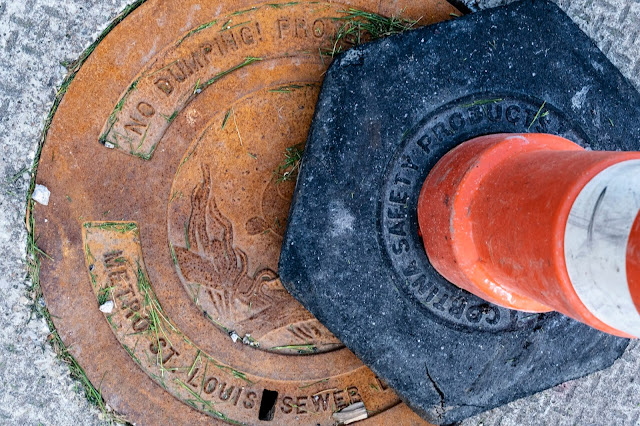 It's not unusual in this country to see a drainage grate that says No Dumping - Drains to Stream/River/Lake/Ocean or what have you. This is a storm sewer cover in my neighborhood. I assume that storm sewer runoff has nothing like the treatment of sanitary sewers and that water that comes through here will find its way into the Mississippi. No one is going to pull this open to dump used crankcase oil but the authorities placed the cone just in case.
Posted by Bob Crowe at 12:01 AM 2 comments:

THE HIGHWAY THAT SPLITS MY TOWN 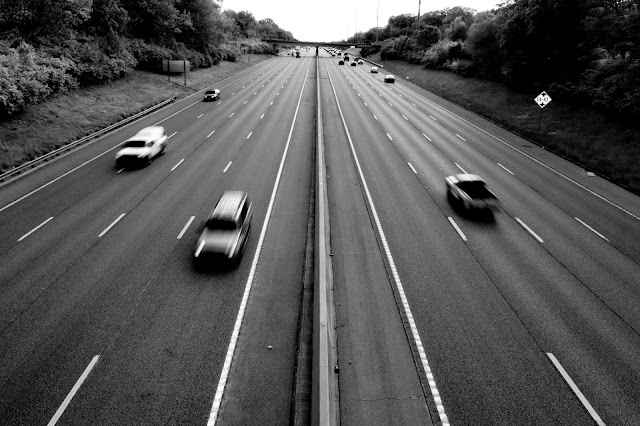 The railroad tracks I showed three days ago cut across Webster Groves but aren't much of a barrier (unless you are trying to drive across them when a train comes by, but that's not often). Interstate 44 is another matter. It forms a shallow artificial canyon with far fewer places to cross than the railroad. Much of it is depressed below the surrounding ground level so it's not visually in your face but is something of a scar and a barrier between neighborhoods.

As long as America remains so car dependent I suppose we need it. These roads are much uglier and cause worse social divisions in some other cities.

Links to this post
Email ThisBlogThis!Share to TwitterShare to FacebookShare to Pinterest
Labels: I 44, Interstate highway, It. Louis, Webster Groves 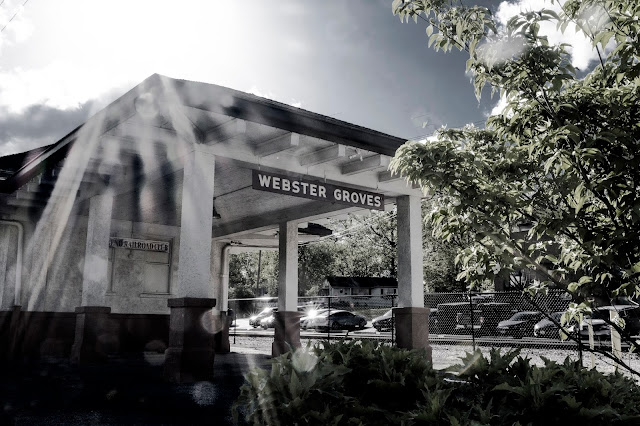 Although I've been in the St. Louis area since I came to college here in 1967, I do not live in the city proper. It has a small and declining share of the metropolitan population. We have sprawling suburbs. This one is now considered inner ring, older by local standards. According to Wikipedia

Webster Groves' location on the Pacific Railroad line led to its development as a suburb. In the late 19th century, overcrowding, congestion, and unhealthy conditions in St. Louis prompted urban residents to leave the city for quieter, safer surroundings. In 1892 the developers of Webster Park, an early housing subdivision, promoted the new community as the "Queen of the Suburbs", offering residents superb housing options in a country-like atmosphere, as well as a swift commute to downtown St. Louis jobs.

That may have been just real estate promotion but it's still a nice place to live, although passenger trains haven't come here in decades. Now the old station houses a model railroad club. 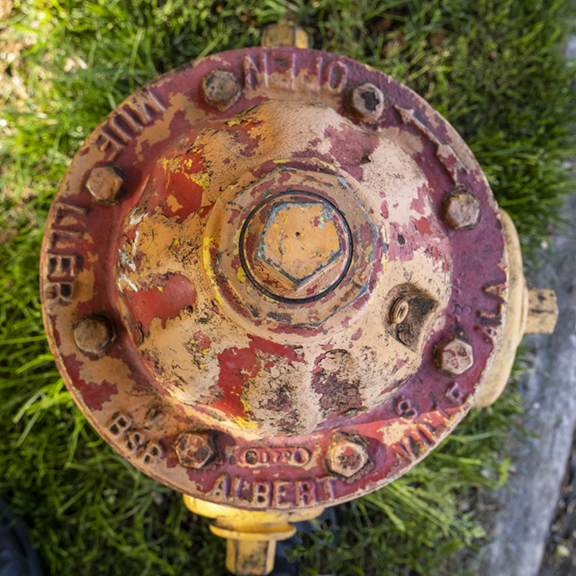 Or that's what it made me think of when I edited the photo, a fiery floating orb with nasty stuff sticking out. Of course, it's just an old fire hydrant that has been painted and repainted many times. I like the patterns in the worn paint. 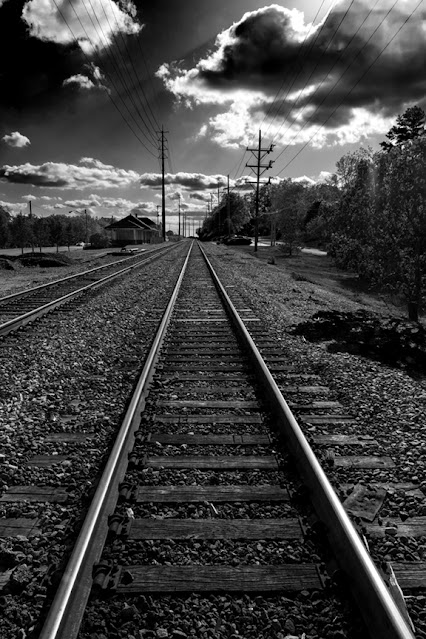 Typical view in this territory. The location is a short walk from my home. 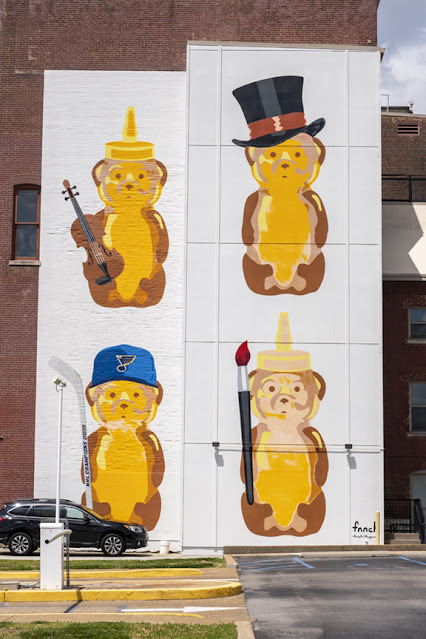 I've got some nice springtime shots in the botanical I haven't posted but I could use some new material. This wall painting faces a parking lot in the Grand Centre (they use the British spelling) arts district. The figure is a squeezable container in which honey is commonly sold here. Why pick that? I get the reference to the visual arts and the symphony hall is nearby. However, the arena where the beloved hockey team plays is two or three miles away and I don't get the top hat at all. It's not like we have a lot of white tie events and such plutocrats as we got are much more discrete. 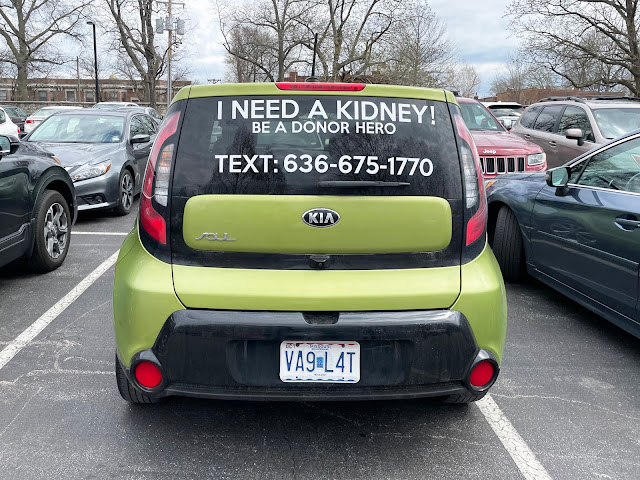 Seen in the parking lot of the botanical garden. I saw another car out on the street yesterday with a similar sign in the back window. Could this happen in any other modern industrialized country? I really don't know. We're the only one without national or provincial health insurance. Maybe the issue is as serious everywhere else. Comments?

YOU FIGURE IT OUT 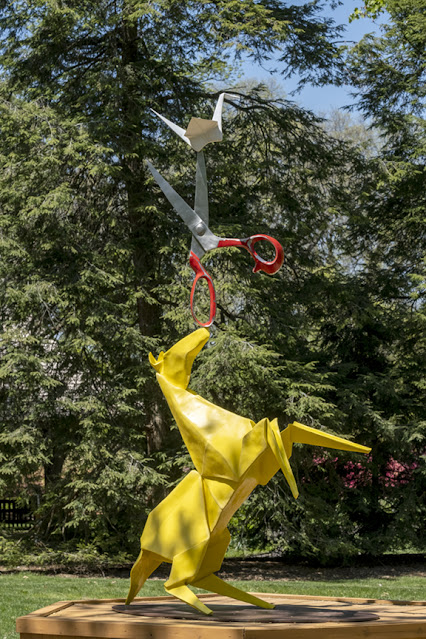 A few days ago we saw one of these metal sculptures in the garden that was a clever representation of the rock paper scissors game. How are we to interpret, though, horse scissors crane? Maybe it's just a visual representation of the complicated and simple things you can do with pieces of paper and something to cut them. 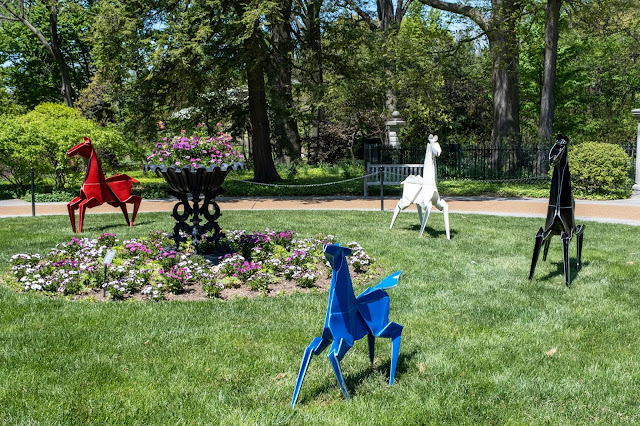 This installation at the metal as origami show seemed strange to me. The figures appear to be running or prancing horses but the flat metal construction makes them look so stiff. Kind of like me some days. In any event, they aren't getting away.

Links to this post
Email ThisBlogThis!Share to TwitterShare to FacebookShare to Pinterest
Labels: horses, Missouri Botanical Garden, Origami In The Garden, St. Louis 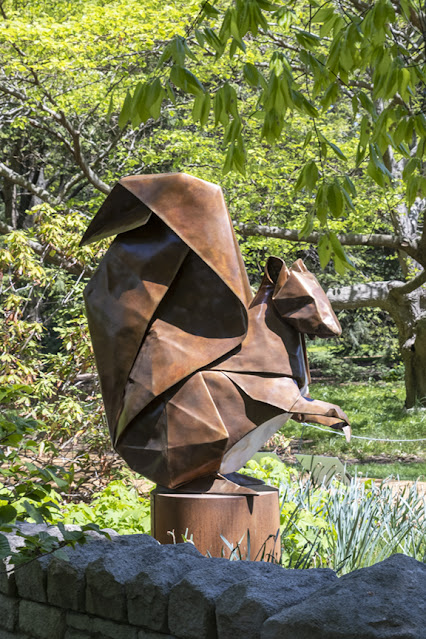 I suppose you  could make smaller versions of these figures out of paper if you had good instructions and enough dexterity (which I don't). The metal acorn lies across a footpath from the squirrel, right under its nose, so to speak. The rodent's metal joints must be too stiff to reach it. THE PEACE OF PAPER BOATS 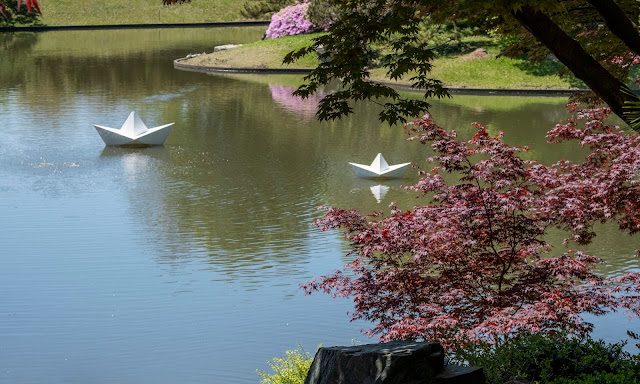 Back for a little more of the metal origami in our botanical garden. The paper boat or paper hat - it amounts to the same thing - is a simple, basic example of the paper folding art. Here, two of them float without ever moving in the lake of the tranquil Japanese garden. The scene looks static but the burgeoning spring is not. 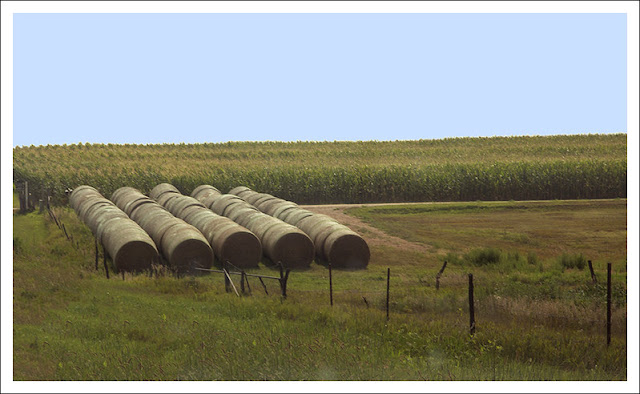 We defined the May 1st theme as earth, the earth or just dirt. I didn't have anything local in the archives that got my attention so, as one of our colleagues says. I went out of the jurisdiction. This is on my brother and sister-in-law's farm in Marshall County, Kansas.