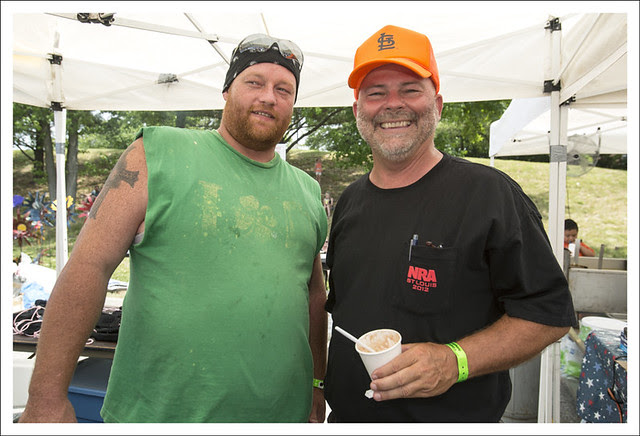 Firearms regulation is mostly left to the states in this country. Every single one of them except Illinois permits carrying a concealed weapon, mostly but not always with a license. You have to be at least 23 years old, take an approved training course and pay $100 but otherwise it's not too hard to get one in Missouri. Somebody could walk into my office packing heat. I'm sure it's happened. There are some exceptions. You can't carry a concealed handgun in a prison (that's a relief), bars (except the owner), publicly accessible hospitals (does that mean it's okay in a locked psych ward?), casinos (I said hit me!) or any church (amen, brother). Plus a few other places.

The gentlemen above were answering questions and selling merchandise for this trade at the Gyppy Caravan. Note the hunter-orange Cardinals cap and the tee shirt from the National Rifle Association convention that was here in April. The flea market booth below was run by a very friendly family selling toy wooden assault weapons. Buy one and get a pistol at half price.

Didn't make a lot of comments yesterday. The family made a late decision to see Othello at our summer Shakespeare In The Park festival. You have to show up very early to get a good seat on the lawn so we bring a picnic dinner and arrive before 6. To me, the main theme of Othello is humanity's boundless capacity to be wrong. 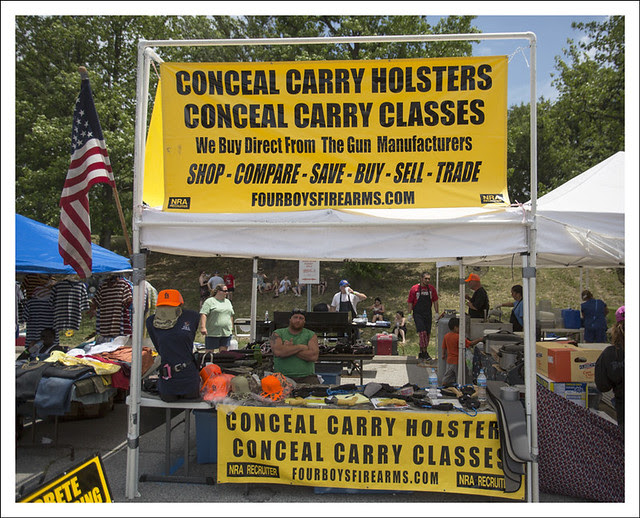 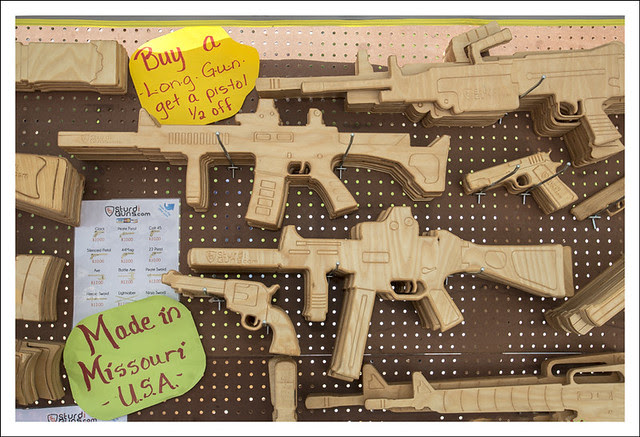 Sorry but this invariably beats me...

In Arizona the newspaper once had a list of the easiest jobs in the state. One of them was a lobbyist for the NRA in the Arizona Legislature.

It's a cultural mindset that I don't get myself.

I've seen quite a bit of Shakespeare, including Othello. There's a company here that puts on performances in parks and other places in July and August.

Since the objective is to carry a CONCEALED weapon, how does anyone know if folks are carrying them in bars, churches, or hospitals? It's not like anyone is actually checking. One more ridiculous aspect of our obsession with the "right to bear arms."

Guns aren't an issue with me so I pay them no mind. But some people, well, I think it's an obsession. Kids, either they do or they don't, but most boys do I find.

Thw whole thing with guns over there is too scary! It just seems so easy. I just don't get the gun totin' concept!!

PerthDailyPhoto, there are no people shooting in the streets.

However, Oakland Daily Photo, I just read something from a guy who says he got an MRI and the alarms went off because he forgot he was wearing his gun. How dumb is that?

People just need to be responsible, especially when they're carrying concealed.