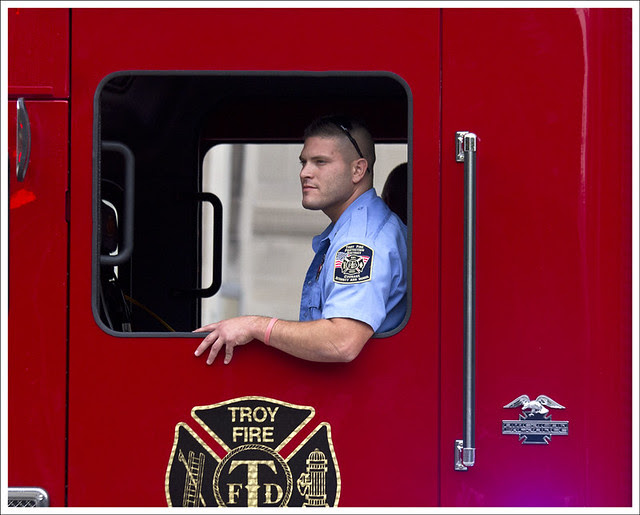 Okay, back to normal local stuff. There was a parade last weekend in honor of the firefighters of the region related to the 9/11 observances. They brought heavy hardware. You don't want to be standing in the street whistling when Engine E 26 comes through (that is one serious bumper).

Lots going on to shoot this weekend. We have The Great Forest Park Balloon Race Tonight is the Balloon Glow, when the airships inflate after dark but do not take off. It's spectacular - see an example of last year's here. The "race" itself is Saturday afternoon. It's not really a race, more of a hare and hounds event. The hare (a balloon that looks like the Energizer Bunny, har har) takes off first. Fifteen minutes later the others go aloft one by one. The winner is the one that lands closest to the bunny.

We also have the Hispanic Festival downtown, which I'll have to work in somewhere. I've gotten some pretty good shots there. 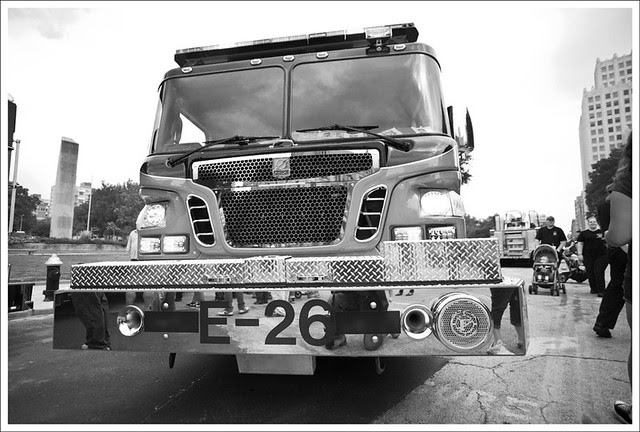 two very different images, each very powerful in its own way.

I agree with Brattcat Bob, the young man in the top picture has such a strong handsome face, lovely shot of him and that is one serious fire truck. Just had a look at the balloons lit up from last year, spectacular, looking forward to this years show!

You get the prize for photographing the most community events.

I would have loved to see more of your wedding photos. If there's a flickr link that you can send me I'd be very pleased.

Yow, you're right. This is a big sucker. Am I the only one who can't get used to chartreuse fire engines? Give me red everytime.

Great composition on top. Love all that red.

Regarding your comment: abnormal high tides always precede the equinox but they just last for a couple of days. Everything is back to normal now and the ocean looks like a lake again.

Hey, Bob, new to your blog and loving it. Outstanding work! I look forward to seeing your Balloon Glow stuff tonight. I hope to get something that compares, myself.