One more from China 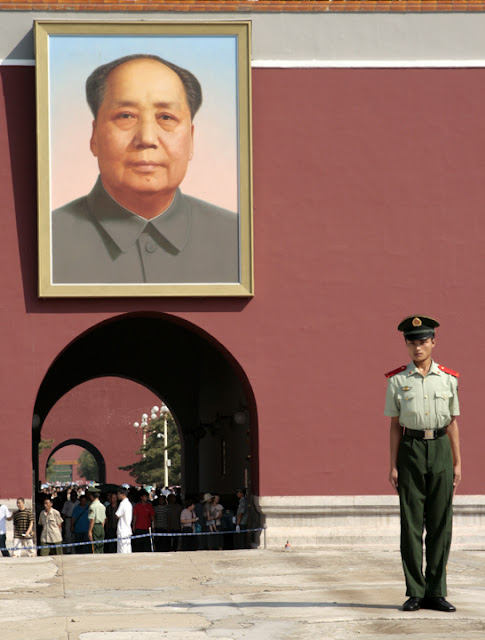 I'll be out this weekend shooting some new local material. In the meantime, think about who may be watching you. This is the north edge of Tienanmen Square in Beijing at the entrance to the Forbidden City, for centuries the home of Chinese emperors. For all of its explosive entrepreneurialism, China remains a police state. There are far more police on the streets than in the U.S. and many prominent storefront police stations. Mao's economic and social policies are now viewed with skepticism but he is still revered as the liberator of the country from foreign domination. His portrait is inescapable. It is on every piece of paper money. No Chinese people we met refer to him as just Mao. It is always Chairman Mao..
Posted by Bob Crowe at 7:53 AM

Great picture, what I like from this picture is you captured expression and the formal pose of guard in front of big picture of chairman Mao. Excellent. I promised my wife travel to China sometime in future. This could be interesting place to travel.

There are some very dramatic shadows in this photo - and one of them is framed.

Yesterday I mentioned that your scene of the Li River reminded me of others I'd seen. Here's one at National Geographic's photo a day site. Yours are equally as wonderful.

Very interesting. China and it's culture has always fascinated me and I hope someday to visit. Wonderful photo and commentary.