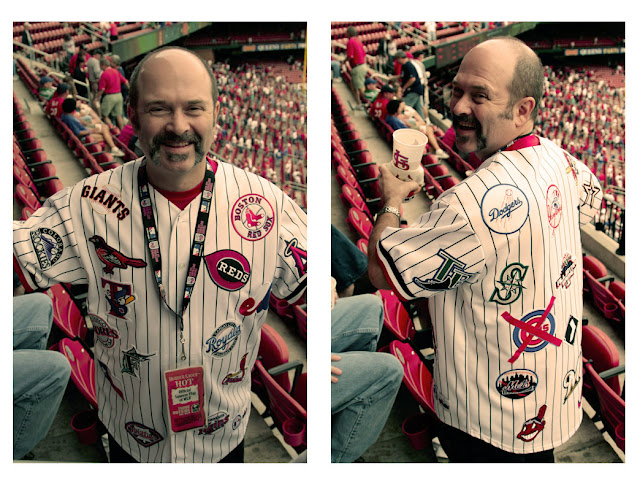 It is hard to say what lies behind it, but feelings about the Chicago Cubs baseball team run strong. The Cubs last won the championship 99 years ago, the longest dry spell of any Major League Baseball team. Some maintain that the name of the team stands for Completely Useless By September. Their antique stadium, Wrigley Field, has been their home since 1916 and was the last Major League park to get lights for night play. Every single game is sold out.

At the end of the Cardinals - Cubs game last Sunday, we met this gentleman wearing a jersey with the logos of all 26 Major League teams. Note the Cubs' insignia over his left kidney, crossed out with a big red X. Your interpretation is as good as mine.

By the way, I want to apologize for the really awful color in this photo. Don't know what I had set wrong on the camera but it looked weird when I saw the original JPG. I tried to color correct it in Photoshop and probably mad it worse. I'll be more careful.
Posted by Bob Crowe at 6:43 AM


a beautiful shirt of Fan ;o)

You know what? I don't know if it's the monitor I'm on at school right now or not, but the coloring actually looks awesome! Gives it a very vintage feel, kinda like an old baseball card. I'll have to check when I get home, but right now I'm totally digging not only the photos, but also the coloring.

Not a Cubs fan I see.