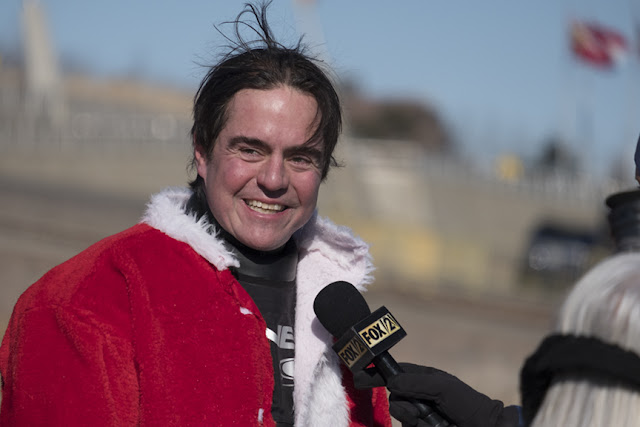 I didn't see anyone dressed like this in the frigid Mississippi after I arrived but I suspect the event began before the advertised hour of noon. There was a picture in the Post-Dispatch yesterday taken from the back of someone water skiing in a Santa suit. I didn't see it. But was it this man? The suit doesn't look soaking wet.

A couple of the TV stations always show up with reporters and camera operators. You can see them milling around below. (New Year's is usually a slow news day.) The local Fox outlet got an interview with the person who would have played Santa in Frozen if Santa had appeared in Frozen. No Fox in this household. We watch MSNBC.

BTW, that skin color and tone is a nice example of what the Fuji X-T2 can do. My 5DM3 would have put too much magenta in the face and coat. 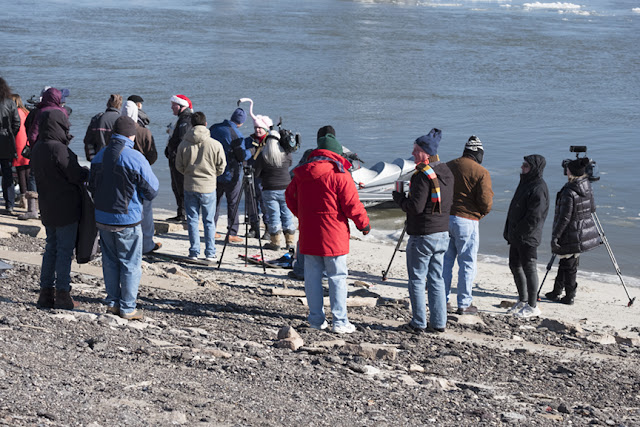 I can't believe anyone watches Fox news! I use the Olympus all the time Bob but I have just discovered that the body and each separate lens were due for an update. Did this yesterday and I can feel such a difference in shutter speed. Can't wait to get out tomorrow and take some pics. It's the first time I've ever updated the technology on a camera, have you?
P.s. I've left a comment back on your theme day post ✨

No Fox News in my household either. I'm a PBS News girl!

Polar bear dips are the New Years insanity here. I rather prefer the news tradition of the first baby born in the new year, which always gets covered too.

Lots of polar dips around the island of Ireland. Crazy if you ask me.
Good that you are enjoying your new camera.