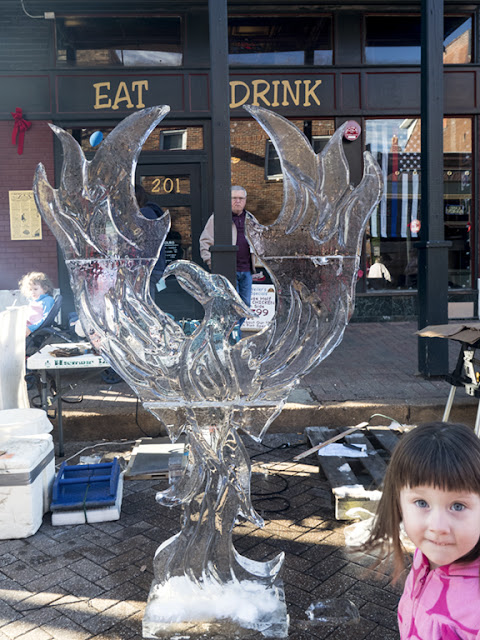 Maybe it's happened to you. You set up a shot in a public place and, just as you are about to press the shutter, an adolescent male jumps into the picture. It's called photo bombing, a little bit of image-making vandalism. I usally give the person a "you idiot" glower and they move on. Pretty annoying but not a disaster. I'm not shooting film.

It appears that the practice has spread to four year old girls.  I was trying to take a shot of one of the better ice sculptures when Ellie decided that she should be in the frame. That's more tolerable. The ice sculpture behind her is remarkable. Notice the seams - it's made out of three slabs. No idea how you do this without the sculpture shattering.
Posted by Bob Crowe at 12:01 AM

You made me smile with this photo!

It's the symbol of Phoenix! I love it. I don't know how they do that either. This one looks so delicate.

Love the sculpture but the sweet little photobomber is the star!