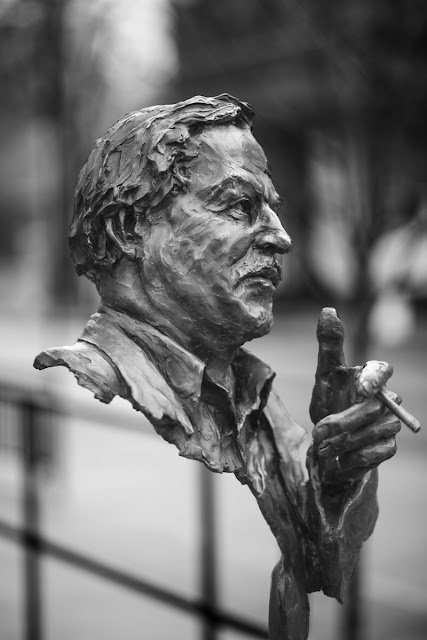 There are some well-known people in the arts from The Lou who checked out as soon as they could (although I went in the opposite direction). There are busts of two of them on the corners of Euclid and McPherson in the Central West End.

Above, Tennessee Williams. This one, I think, is more successful. Williams was born in Mississippi and got his nickname from the origins of his father's family. He arrived in STL at age 8 when dad got a job at International Shoe Company.  (There used to be a saying about St. Louis - first in shoes, first in booze and last In the American League. That was before the St. Louis Browns became the Baltimore Orioles.)

T. S. Eliot, below, looks rather frumpy by comparison. I suppose he was. He left STL at 16 and eventually became a British subject, renouncing his American citizenship. He was very High Anglican. And, I hear, he ended not with a bang but a whimper.

But, hey, Chuck Berry has stayed here his whole life. 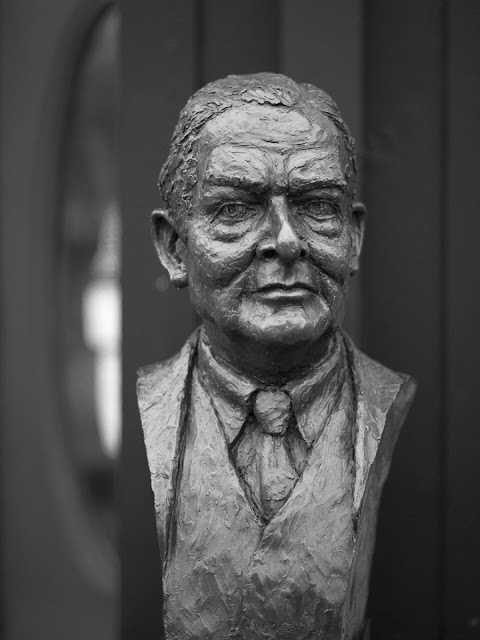 Quite a difference between these two. Williams seems more engaging.

These two seem to be opposites. Williams looks like he has a sense of humor while Elliott seems so serious.

The Williams sculpture is more successful. Eliot (one L and one T) never seemed like a guy I wanted for a buddy. St. Louis was well rid of him. I would take the Chuck Berry for T. S. Eliot trade any day.

Well I learnt something tonight Bob, I always thought TS Eliott WAS English.. not from the Lou 😊