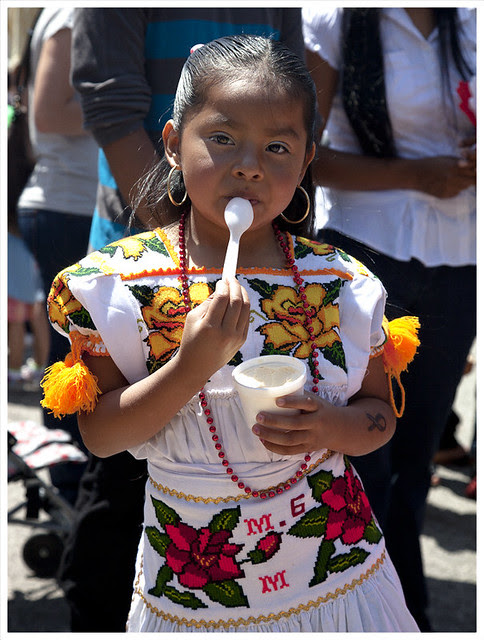 There is a notable tendency in this country to adapt certain days as an excuse for drinking in the streets and a big outdoor party. St. Patrick's Day has been that way for decades. Halloween has turned in that direction.

More recently it's been Cinco de Mayo. If I understand correctly, the day is of passing note in Mexico. It marks the anniversary of a victory by Mexican revolutionary forces over the French colonial armies (did you know that Mexico was for a time a colony of France in the 19th Century?) The big national celebration is Independence Day in September but Cinco de Mayo is all over the US now, sponsored by beer and tequila companies. Our town's party takes place on the nearest Saturday on Cherokee Street, the center of our small Hispanic community. This señorita has the good sense to stick to ice cream.

The festival is preceded by the People's Joy Parade. Lots of folk in this town have figured out that if you want a good time, just start a parade. Got a ton of good pix so more to come.

Partying on the streets while drinking tequila sounds a bit dangerous. I hope it will be a few years still before this cute girl will try something like that.

Nice photo. It is strange that France ruled Mexico for a time. It is even stranger that several Central American countries were ruled by an American from Nashville who led a private army to establish a country that would perpetuate slavery. His defeat in Costa Rica is commemorated with a national holiday. Maybe that should be celebrated in the USA also, rather than Nashville honoring him with a monument.

A fine portrait here that captures the spirit and feel of the day.

I lover her expression and her colorful dress. Cinco de Mayo tends to be big in Phoenix promoted by the many Mexican Restaurants in town. I was with friends in London on May 5th a few years ago and we had dinner at a Mexican Restaurant there but, they had no idea that the day was something to celebrate. That was a fun time that I think about every Cinco de Mayo since.

One fine portrait , B.
V

I agree with you on the drinking & partying part. Seems like every holiday is now just another excuse and I have to admit I didn't know the history behind Cinco de Mayo either. Great photos. I might have seen you there. Saw lots of people with big cameras that day.