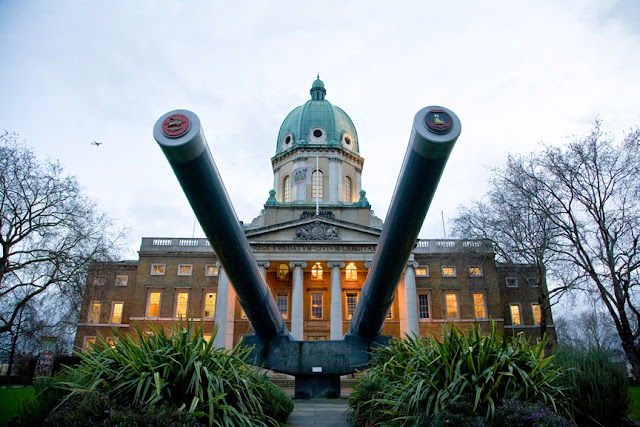 One of the more out-of-the-way attractions in London is the Imperial war Museum, in the Lambeth area of the South Bank. It does not glorify either empire or warfare. I found it to be a moving lesson about Britain's conflicts in the Twentieth Century, particularly its fight for survival in World War II.

Out front are two of the biggest guns Britain ever built - or perhaps the biggest; I get a little fuzzy on the details.

Back to St. Louis pix by the weekend, I hope.

TOMORROW: A monster along the Thames
Posted by Bob Crowe at 6:26 AM

The angle chosen for the photo is superb, bravo

Holy cow, that makes for such a great thumbnail on CDPB. How big are the guns? The biggest we ever made were 18" guns, I think the Japanese had 19" guns on the Yamamoto. Eh, I might be off, I'm too lazy to go look it up.

Great shot though, I like how the building lights show, so that you have two different color temps going on, makes the heavily-armed building inviting.

Thanks,
- Mitch in Minneapolis

When my family visited the Imperial War Museum, it was summer, and this heavy artillery was surrounded by rosebushes in bloom.