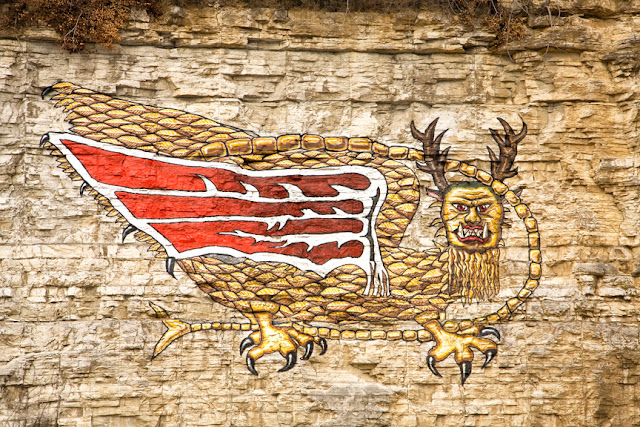 There are miles of bluffs over Great River Road along the Mississippi and Illinois Rivers, running north from Alton, Illinois. Round a bend just north of town and this smacks you in the face from one of the limestone walls. The Piasa (PIE-a-saw) Bird is the stuff of local legend. According to Altonweb.com:

Its foundings go back to 1673 when Father Jacques Marquette, in recording his famous journey down the Mississippi River with Louis Joliet, described the "Piasa" as a birdlike monster painted high on the bluffs along the Mississippi River, where the city of Alton, Illinois now stands.

According to the diary, the Piasa "was as large as a calf with horns like a deer, red eyes, a beard like a tiger's, a face like a man, the body covered with green, red and black scales and a tail so long it passed around the body, over the head and between the legs."

The creature was given its name by the Illini Indians, "The Piasa", meaning a bird that devours men.

Or, if you would prefer a competing version, check the Great River Road web site

On the other hand, a Southern Illinois history site says that the bird is complete bull. This commentator said it was dreamed up in 1836 by a writer of frontier romance and adventure stories. Still, it's pretty cool, makes for a great local yarn and could scare small children. That's good enough.

wow. that was a cool bird/monster!