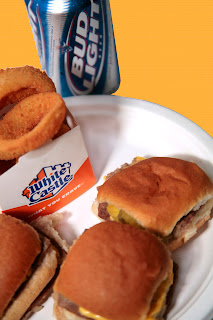 Breakfast of Champions!
How age changes us. The subject of the first photo was a very special Sunday morning breakfast when I was in college. 3 or 4 AM Sunday morning, after a night of partying.

White Castle is something special to me. (See also here.) I have a previous post about it. A few years ago they had an ad campaign with the theme, "Hamburgers for breakfast? Why Not?" Hors d'oeuvre-ish, square little burgers, about 2.5 inches (6 1/3 cm) on a side, slightly greasy, full of onion flavor, moist (grilled with steam, if you can imagine that), nutritionally worthless and absolutely deeelishus. Their trademarked slogan is "What You Crave" and, by God, I still do. Back in my reckless youth, they were particularly appreciated in the small hours, washed down by the last brewski of the night (except they didn't have light beer back then and we couldn't afford Budweiser. The can in the picture is for illustration purposes only.) Now they are a rare treat when there is an exceptional need to reward myself. 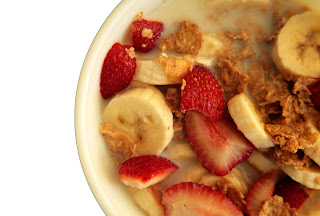 TOMORROW: Thursday Arch Series
Posted by Bob Crowe at 12:05 AM

We have always affectionately referred to White Castle burgers as "gut bombs." !!

Oh, those square burgers. I have a friend who was vehemently opposed to them on account of their squareness. As times change and your breakfast habits have changed, maybe not anymore. :-)

I see everyone's eager to show their breakfasts so I have an unexpected early start on the US blogs already. Off I go to Boston!

Our habits do change...but I miss the old days.

I think I will get bored of greasy burgers faster than strawberries :-)

What is it about WC's that makes everyone wax nostalgic? Don't know if it's universal, but in Detroit & Chicago they're known as "Sliders."

Great post! But I'll take the boring breakfast today, thanks.


in the breakfast of the bud-light, I believe that I will remain with the French breakfast with good cheese, rillettes and red glass of wine; O)

I'm with keropokman and neva too!

You'll be around longer on the healthy breakfast!

Nice photography and nice commentary too. I like it and the breakfast of champions. I eat that too, sometimes.

I have to say that the first one turns my stomach a bit, but I can't deny that I've not had similar breakfasts. (What is it about greasy burgers at 4 am?)

That is funny! Another good combination is cold pizza and beer.

Oooh White Castles! I love it! Like you, I haven't had White Castles regularly since my party days, though I've been craving them like mad lately. As soon as I have a spare bit of change and nothing to do around lunch hour I'm heading over to the nearest Whitey's (Maplewood) for their newest buffalo chicken bites or whatever, along with a cheeseburger! *drool* Did you know the Beastie Boys put White Castles in several of their songs because, being from the east coast, they only ever encountered it while on tour here and became absolutely obsessed. That's what I hear, anyway.

Thank you all for your comments. I didn't expect so many eeeewwwww yuucckkk recations but I'm happy just to get a rise out of people! And remember, the first picture was a special treat breakfast from 35 - 40 years ago. The second one is now my routine. Why, I can't remember the last time I had a beer for breakfast. ;)

Shoosh - I'm a bit old for the Beastie Boys but I've heard some thanks to my kids. Where are they from? There were White Castles in several northeastern cities. I became addicted while growing up in Queens, New York City. They are in Philly, too.

R&R - we call them sliders here, too, but I don't remember that term being used in NYC when I was a kid. Actually, WC has tradmarked the word "Slyders." It all tastes the same.

IMHO, theme days are meant to have fun and I hope I never take a topic too literally. It looks like the September 1 theme is going to be street signs and the like, and I have a few ideas. I'll be traveling from Shanghai to Guilin, China, that day but one of the team members can probably help me out. And speaking of which, look for postings by a new team member, ShadowyOne, any day now.

Isn't that the truth...
THEN
and
NOW

Hmm, I thought you might regale us with the tale of one very LARGE but unfinished breakfast of sliders from back in the day.

I eat only pickled herring for breakfast, so I didn't think anyone really wanted to look at that.

U refers to a family legend, often retold and embellished by me, about the night some college friends and I went to the White Castle near St. Louis University in the wee hours and the rich (and inebriated) kid ordered a number of sliders somewhere in three figures. When the poor drone night-shift waitress asked, "Would you like any fries with that?" I completely lost it.

But, U, I know for a fact that you snarf down bangers & mash with a Krispy Kreme jelly donut on the side, all washed down with genuine Japanese green tea, almost every morning. What you makin' up this BS for?

These days, I would prefer the cereal and fruit, too.

What happened? You grew up, that's what! The only "sad" part to me is you eat it at your desk at 8am. What a mad world that has us tied to desks at such ridiculous hours :-)

BTW that other one looks REVOLTING. Pappy sweet bread makes me gag!

I wish we had White Castle down here. We have to make do with sliders from the frozen foods section.

Funny and oh so true ... I think White Castle is more of a northern franchise and as a result I have never eaten there. However, I have seen the movies which made the franchise a house hold name and we have similar, or maybe knock off, hamburger joints in the south.

Oh, I don't know, I'd say there is plenty of joie de vivre in Breakfast No. 2 (look at the color of the strawberries, they're gorgeous!) It's OK to miss your youth but I don't know about breakfast No. 1, though ;) Great post, I can totally identify with the underlying thought.

Great photos. I have never eaten at a White Castle but the way some people rave about the little burgers, makes me want to try the next time I'm in a USA city that has one.

You know, I think they're from Boston, but I really have no clue. And like I said, it's just what I've heard. Rumors and tales often only have the slightest trace of reality. If I were to guess I'd say the Beastie Boys actually became White Castles obsessed because they were stoners.

Oooh, street signs for September. I've been meaning to get a photo of the ones at the corner of my street, because they come with a bit of history. Perfect!

I've decided that White Castle is the HEALTHIEST fast food restaurant in the city.

Okay, so I really like their freshly brewed iced tea and I have to rationalize my reason to go there instead of eating a salad.