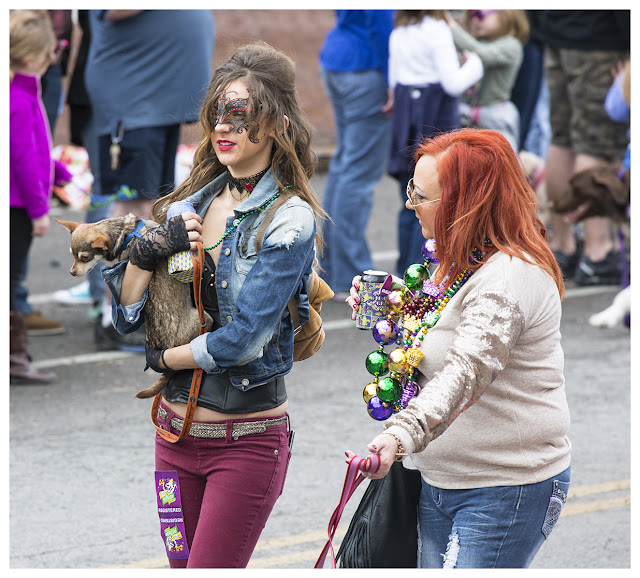 It will get even wilder at the main parade on Saturday although there will be fewer dogs.

I meant to get more of these pictures edited but Madeleine was over last night. Not that I mind, but she particularly likes my attention. This child has been strongly attracted to music since she was old enough to notice. My daughter and I were playing her YouTube clips of our favorite opera bits. She liked Papageno and Papagena's duet from The Magic Flute, Les Petits Soldats from Carmen, really liked The Ride of the Valkyries, but was transfixed by the Prisoners' Chorus from Fidelio. She watched the faces open up as they emerged into the light and, in her little squeaky voice, said "they're happy!" That's my girl.

NOTE TO FLICKR USERS: some of us upload our photos to Flickr and then link them to Blogger when we prepare a post. I've got thousands done that way. Yahoo, which owns Flickr, announced major cutbacks on Tuesday while they continue to try to figure out just what it is they do. Flickr will be cut back somehow but not eliminated. Until we find out what's going down, I'm uploading my photos directly to Blogger. Sure hope this doesn't cause my blog to lose several thousand linked images.

I loved your description of Madeleine enjoying opera. I can almost picture her expressions.
I heard that story about Yahoo on the news last night and wondered about what would become of Flickr. I don't link my photos but as you know I do have a Flickr account. The tech industry is proving to be very fickle.

She's developing a taste for culture. Hopefully you've got your photos backed up elsewhere.

I rather like the facial paint on the one woman.

How sweet that your gdaughter is developing a taste for opera.

That is a fine mask on the young woman on the left. Yup, you are VERY lucky to have so much time with, and influence on, Miss M.

Oh you are so lucky to be close to Madeleine, even though Skype is good it's not nearly the same. So Miss M is into the classics Bob :) too cute! As for Flickr I have no idea,but I am getting fed up with the whole social media thing. Maybe it's time for me to retire :)

I love your daughter and you helping develop Madeleine's taste for the Opera. The papageno-papagena duet is one of my favorites.

PS - are you getting good quality music from You Tube? Opera doesn't go well with poor quality sound systems in my opinion.