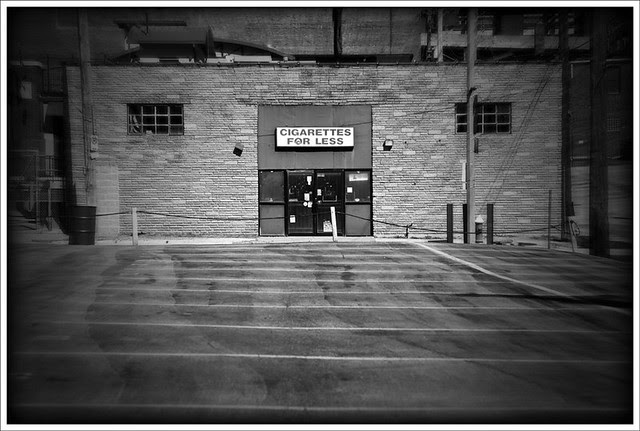 Missouri has the lowest state tax on cigarettes in the country, 17 cents a pack. On the other end, New York is $4.35. In New York City the total is $6.46. Yet another reason to view our state as backward. I have little tolerance for smoking. I did it myself when I was young and nobody knew better. The truth eventually got around and I've been off them for decades. Sure, the addiction is hard to beat but the alternative is slow suicide. Some defend smoking as an exercise in personal liberty but they add to my health insurance bill. The rest of us have to help pay for the consequences. My views are obviously strong but, still, I wonder how anyone in my culture can work for a tobacco company and live with themselves. But what would you do if you had been unemployed a long time, you were in danger of losing your home or couldn't feed your children, and you were offered a good job from R. J. Reynolds? None of this is simple.

This store is adjacent to the truck weigh station in last Monday's post, just south of the baseball stadium. It has been closed for a couple of years. We do, however, have a very active chain of shops in the area called Dirt Cheap Cigarettes and Liquor. It describes itself as the last refuge of the persecuted smoker.
This blog does advertise the occasional rant. Someone once left a comment complaining that there never were any. Well, we got one today.
Posted by Bob Crowe at 12:01 AM

The worst situation I encounter is parents who subject their kids to second hand smoke.

I'm not sure about the percentages here, but I know the state earns a lot with smokers! Very cool image, Bob.

Bravo to you. I feel the same way, and I guess so did Buddha, with #5 on the Eightfold Path--right livelihood...no dealing in intoxicants, poisons...

But you're right; what would you do if you needed the money and only the tobacco company offered you a job?

I'm with you 100% Bob, smoking is disgusting in every way, apart from the 'slowly killing yourself' aspect I find it mind boggling that smokers would WASTE all that money. It is a complicate situation though, with the work situation the way it is all around the world, would hate to be in that position!
btw Bob your picture for the themes day was fabulous, I laughed when I clicked on and saw both the arch and the electricity pylons, I should have known you'd find a way to incorporate both. Brilliant!
btw. (again) how fantastic to be off to Tamarindo soon, Dave's condo's look so good. I'm sure you'll have a fabulous time with all those beach scenes to snap! You should so some serious 'chilling', it seems you've been pretty hectic work wise lately!

Nice image, Bob. I stole two cigarettes from my mother and smoked them behind the barn in the sixth grade. Never again! I don't like being places where people smoke, but I am more live and let live about the issue than you are.

I guess you can ask how people can live with themselves that work in a fast food restaurant, liquor store, a defense contractor. Heck, how can lawyers defend criminals and how can Realtors help investors pray on those that are losing their homes in foreclosure? There's a dark side to lots of careers, especially in the over commercialized US of A.