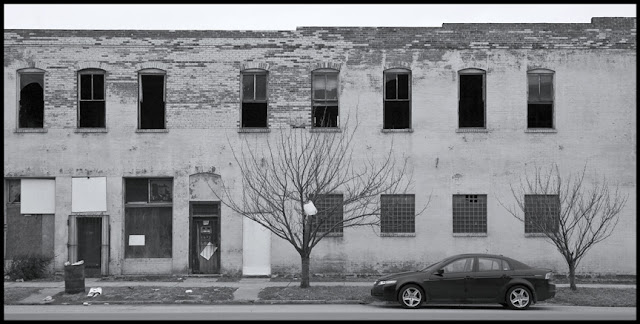 The City of St. Louis is shaped roughly like a water or tear drop. Read into that whatever you want. The longest street is Broadway, which runs along the Mississippi from one end to the other. The parts of the city near the river are mostly older and much of it is faded. A drive down Broadway demonstrates the point. This empty block is not far north of downtown. An abandoned building, no pedestrians, no parked cars except for mine while I went across the street to take the picture. The neighborhood action, such as it is, is a couple of blocks south, where there is a big biker bar and tattoo parlor.

The stretch of Broadway downtown is different. It passes office towers, the enormous domed football stadium, the Federal Reserve Bank, the Old Court House and the baseball stadium. It changes back to its usual character just a bit beyond where the Cardinals play when you pass the White Castle. I have a project in mind for the spring, to drive the length of the street a few times, taking pictures as I go. Might make it into another weekly series. It would be a good illustration of St. Louis.

Cool blog you have.

I don't know why I love pictures like this so much. Abandoned buildings. Just love 'em. There's more than one website out there about exploring such places. Of course at the moment I can't recall any urls.

I've driven much of Broadway...though not the entire thing. I love the buildings and can imagine what all these areas could be. If I had more guts, I would work on Broadway one building at a time!

There are several bright spots on the south side for me (being involved in music):

J. Gravity Strings and Cine Services. Both of these businesses are in old buildings. Then Shattingers, which is newer, but interesting.

Great post, one major way of understand aby kind of business is using the tools and information you have provided, will save and share your blog. Website SEO Company