My Toynbee Tile Obsession: A Third Located In St. Louis 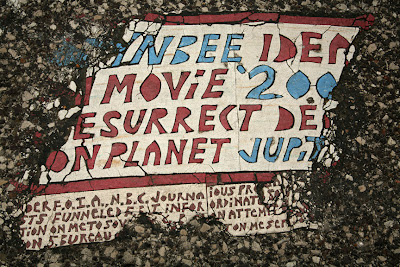 Web sources say that there are three Toynbee tiles in St. Louis. I located this one yesterday at the intersection of 7th and Market Streets. Again, I must have walked over it hundreds of times.

This tile is the most deteriorated of the three but has the most extra text at the bottom. Here's as much as I can make out:

F.O.I.A refers to the Freedom of Information Act, a U.S. law that requires federal government agencies to reveal information to the public on demand, with exceptions for personal data or matters related to national defense and security. For our visitors from other countries, N.B.C. is one of our major television networks. Are there any linguists out there who can fill in the obliterated words?

Three tiles have been reported in South America, in Rio de Janeiro, Santiago and Buenos Aires. Karine and Ale, the BsAs tile is said to be at the intersection of Avenida de Mayo, Rivadavia and Parana.

I'd like to see photos of Toynbee tiles from CDPBers in these areas. Please e-mail me or post a comment on my site if you do so. This is enough on the topic from my city for now. If I locate other tiles in STL, I may report at another time. And, as I mentioned yesterday, I'll be in the tiles home town, Philadelphia, this weekend. Might post something next week about my findings.

This whole business has taught me something about my own perception, or lack of it; what I notice and don't notice.

I hope that you find a few tiles in Philadelphia. This practice really intrigues me now!

What do you think they are made of and how are they applied to the asphalt? They look to me like different colors of colored rubber poured into a stencil to harden. Which would be difficult to accomplish in the middle of an intersection. Although downtown St. Louis might be deserted enough in the wee hours of a weekday.

From the NYT article I cited: "Now a computer consultant in Atlanta, O'Neill said he has spotted the signs, which could be plastic melted onto the pavement or stenciled images made with the thick paint used for traffic lanes, in front of the White House and, recently, at rest stops on the New Jersey Turnpike."

And from Wikipedia: "Theoretically, the method of laying such a tile is simple. It has been claimed by prominent Toynbee-tile enthusiast Justin Duerr that a newly laid tile was once found and examined. This new tile was wrapped in tar paper and placed on a busy street early in the morning (perhaps only a few minutes before its discovery). The pressure exerted by automobiles driving over the tile for weeks on end pushes it into the road surface. (It can be speculated that the tile maker may have laid his tiles during warm weather.) Eventually the tar paper wears away, exposing the message carried upon the tile.

A reader of one Toynbee-tile enthusiast Web site reported a tile found in Pittsburgh that included deployment instructions, which the reader transcribed thus: lenoleum, asphalt glue (?) in several layers, then placing tar paper over it so that car wheels won't mess it up, and apparently the heat of the sun on the tar paper will bake it into the street. This tile was located near the Pittsburgh Hilton, and has since been paved over."

To add to this part of the mystery, some of newer ones in Philly are on exit ramps from major highways. The tile whose photo I posted today is in a crosswalk near the curb and would have relatively little vehicle traffic over it. The first two, although also in crosswalks, are in traffic lanes - and they are in better condition.

Hmmm! Won't the constant pressure from the cars break the tiles?

Bob, I made a special trip downtown last Saturday morning, intent on snapping a few pics of Kansas City's Toynbee tile. It wasn't there! The locals at the bus stop must have thought I was an odd sight walking around in the middle of the street intently staring at the asphalt. There is massive construction going on these days, so I'll try again the next time I'm down there!

There are two tiles in Fishers, Indiana. One at the McDonalds, and another at the stop sign at the ellipse drive around the park.

Tried to find 2 while in downtown Chicago a few weeks ago. No luck at either location (January 2012).
Recently started hearing about the "You just need to relax" tiles in St. Louis. I saw one of those downtown by Scottrade center.