Gaze At The Western Skies 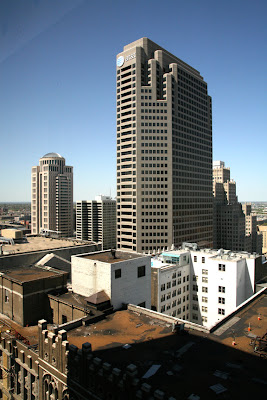 Well, southwest, actually. This is the view from my partner's office in another corner of the building. The big tower in the center was/is the . The building on the left with the dome top is our new federal courts building, home of the United States District Court for the Eastern District of Missouri and the United States Court of Appeals for the Eighth Circuit. (Like you care.) I am admitted to practice in both forums but I avoid those people as much as possible. The courthouse is actually the taller of the two, barely shorter than the Arch, but its image is shrunken here by a wide angle lens.
The two buildings in the center foreground are old office building that became vacant. They are among the scores of unused commercial structures in downtown STL that have been renovated into lofts and apartments. The one in the foreground is just under construction now. Having worked worked in the area for more than 30 years, it's a delight to see a real upswing in population and services.

TOMORROW: All Hat and No Cattle (change of topic)

Bob, I was surprised about your comment on the Mosque post in Madrid DP! so thank you!
And thank you too for another stunning view!

Wow! This cityscape is just over the roof!

Who would have thought, while sitting in the back of a cold cave, that someday, people would actually sit in a comfortable space 20 - 30 floors up? Somewhere along the way from those times to your fantastic photograph, the concept was imagined and built. I like your picture and wonder what the next thousand years will do to the scene.

I have celebrated this day, Mother's Day in my country, with a magazine cover for my wife. I hope you can see it.