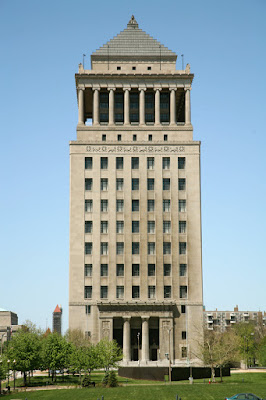 To the casual observer, the Civil Courts Building in downtown STL might look like just another old government structure. Hovever, a closer view of the archetecture reveals it to be genuinly wierd. Here's a description from a web site about St. Louis history:

The building is the replica of the tomb of King Mausolus built in 352 B.C. at Halicarnassus in Asia Minor. It has a step pyramid on top of a Greek Temple with a pair of griffins at the peak. It houses the law library atop the ten stories of courtrooms. The building combines elements of many divergent styles including Egyptian, Greek and Oriental.

An archetectural web site has these comments:

The building's style can be described as Greco-Egypto-Assyro-Babylonian. At the top of the building's ten-story shaft is a step pyramid. The area below this pyramid is a law library, which is reputed to be a very attractive space with high ceilings and lots of light.

On top of the pyramid are two aluminum griffins that are twelve feet tall. Unlike mythological griffins, they have human faces that symbolize human mercy tempering justice.

The building was completed in 1930 and has been the site of civil litigation ever since. Some detail is shown in these enlargements: 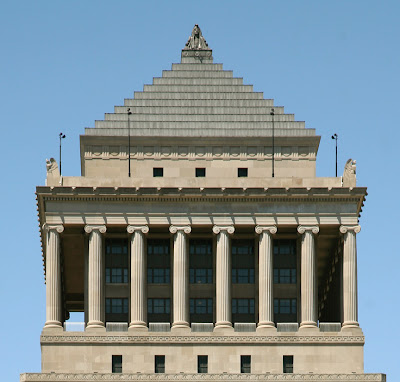 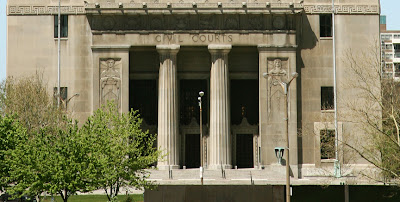 TOMORROW: Thursday Arch Series
Posted by Bob Crowe at 6:25 AM

Very Egyptian! I loved the architectural history of this building. It would have been a good one for the May 1 theme day, too.

That is so cool!! I've heard of Greek revival, but I've never seen Greek-Egyptian-Assyro-Babylonian revival!

Considering all of the things it actually has, I can say it is interesting and your photo captured all of those things.

Thank you, this is the first time that I heard and saw a Greco-Egypto-Assyro-Babylonian style...that a really some style. Good captured.

Thank you all for your comments. It really is a strange building but you have to look carefully at the details to see why.

iBlowfish, it there a reason you don't have your blog open for comments? You put up some good pictures. I get to the Cleveland area every once in a while - my brother and family live in the eastern suburbs.

That looks like a huge building. I bet it's a great view from the top.

Thanks for the several views of the building, which I find fascinating. It is very unusual and your narrative pointed out all the different elements so well.


Architecture very interesting and surprising (especially that this building is all alone, that made odd). to answer has your questions about the American foot in France: there are 3 divisions and each division with two conferences, and each conference with between 4 and 6 teams). It is a sport amateur, but which does not attract large world. me I adore the American foot and I support the team of the corsairs of Evry (in the USA, I support Giants of NYC)