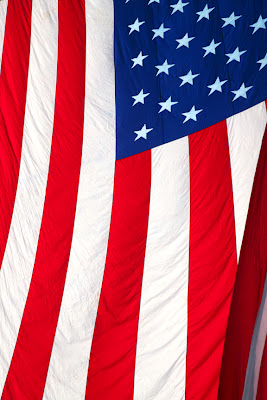 This is the flag in yesterday's post, shot with the low sun behind it. Such an image stirs strong responses in many Americans.

It got me thinking about national flags in general, both as symbol and simply graphic design. Which countries' flags do you think are the most beautiful or most meaningful? Skim the list of 57 (at this writing) thumbnail flags at the lower left of this page, or check this or this exhaustive set of illustrations. As an American, I won't comment on ours. I might vote for the flag of Nepal as being the most original - the only one that isn't a rectangle - but for simplicity and powerful graphics I also like Japan. The flag of South Korea takes this design a step further, adding symbols of traditional philosophy. In the western hemisphere, I am partial to the celestial flag of Argentina, with its sky, clouds and sun. This has nothing to do with my feelings about a country, just the design of its flag.

What about national anthems? They go hand in hand with the flags. Unfortunately, many are very dull. IMHO, none come close to the kick-ass national anthem of France, La Marseillaise. Click this site, choose French or English, then click The Music/La Musique and listen to a recording by Placido Domingo - you can't stay in your chair. (Okay, he's Spanish, but just submerge yourself in his voice.) I also like the simplicity and purity of feeling of Oh Canada. Click that link for the lyrics in English and French as well as a downloadable mp3 played by an orchestra. A beautifully sung version may be found here.

What do you think about national anthems and flags? Tell us in your comments.

TOMORROW: Eat Rite Or Don't Eat At All

It would be difficult to chose because each country is proud of their symbol. I love our own flag, but I think most people will feel the same. The photo would be a great one for Independence Day because it is unusual rather than standard fare.

I agree! Nepal has the most original flag.

My favorite anthems (because of their beautiful music and meaningful lyrics):

Actually, the Swiss flag isn't a rectangle either.. it's square. Urm, I'm not going to say anything else about that. :-) There is another square flag, but the name of the country escapes me. Anyone?

I'm not officially Swiss (yet?!) so I'll share my current observations about the Swiss flag. One interesting thing I've noticed here is that people have a very easy relationship with the flag. In that, there's isn't much pomp and circumstance involved (compared to what I felt in the US), as far as I've noticed. It is true that you'll see a lot of Swiss flags all over the place. But then, for me personally, it isn't too surprising in a country where there are 3 (4) official (national) languages, and driving 3 hours from the center can put you in one of four different countries.

I realise I went off on a tangent from your questions. Sorry..

To me it is like a state flower or a state bird. The "national" anthem is something representing the country. I think all have one or two. The flag is a symbol that is often abused and misused and most people in this country do not know they are supposed to stand up and salute the flag when it passes in parades. Or, stand up, at least. The most influential place I ever saw the American flag was on top of Mt. Surabachi on Iwo Jima.

Swedens flag is blue and yellow. For me that means the sun, the sky and water. Or nature if you like. I never sing the national anthem. I only ever hear it on sports events, but I do of course love my country.

In Spain, the thing about the flag is a little bit polemic... there is a lot of people who refuses it and there's a lot of people who loves it. It's a political stuff nowadays...
What I can tell you that i don't really like its colours, i think it could be more beautiful, but well, it's aour flag, and when I see it I think of Spain and that's something important uh?
But I don't think it represents me. it's just a symbol, i don't know... maybe i'll post one for tomorrow... ;)

Nice photo.
But
I wish all national falgs could be banished forever. The amount of killing done under the auspices of flags is enough to turn me off. Cos at the end of it all, wars are about control of territory and power over the people living within the bordrs.

And because nationalistic flag-flying fervour is a convenient mask for racist and jingoistic nationalism.

I hate the way Australia, which used to be pretty relaxed about flag-flying has been taken in the grip of flag waving at every opportunity. Racist nationalists wrap themselves in it and justify their loud mouthed views of oppression for example at Cronulla.

The most beautiful flag - the Torres Strait Islander one. Not a national flag, but a statement about history and dispossession under another flag. I like its colours and balance.

In terms of national flags, I like the designs of the Papua Niugini bird of paradise, and the Lebanese Cedar. I like the Welsh one too. And Kiribati. And St Pierre and Miquelon (I like pictures). South Africa's rainbow of colours is a statement of reconciliation (if not wholly achieved in practice). For simple elegance, the French flag does well.

The other square national flag is the Vatican's.

I like the maple leaf flag of Canada too (another picture).

Thank you all for your comments. Z and Sally, I'm glad that you reminded us that the Swiss and Vatican flags are square - got by me, although I've visited both of them. Dsole, I suppose that our feelings about our own country's flag is intertwined with our feelings about our country. I really like the Spanish flag - it is full of passion and energy. Sally, I agree about the French flag's simple, elegant beauty. I think it's that gorgeous shade of blue, combined with vertical stripes that look like pillars to me. The Russian flag has almost evactly the same colors but the thinner horizontal stripes just don't carry the same power.

And lastly, Sally - your blog says that you are opinionated. You let us have it! Flags are about US being a group and different from YOU, division rather than unity, differences rather than our common humanity. You, I and lots of other people wish our species considered the latter more important than the former. It may take centuries and/or some genetic changes for us to get there.

Wonderful rant from Sally, got to love her for that!
I like the Aboriginal flag, for its simplicity and strong symbolism.
http://en.wikipedia.org/wiki/Image:Australian_Aboriginal_Flag.svg

Black people on the red earth under the yellow sun

But like Sally, I'm too concerned about flag waving to really enjoy the discussion. Dreadful in the US.