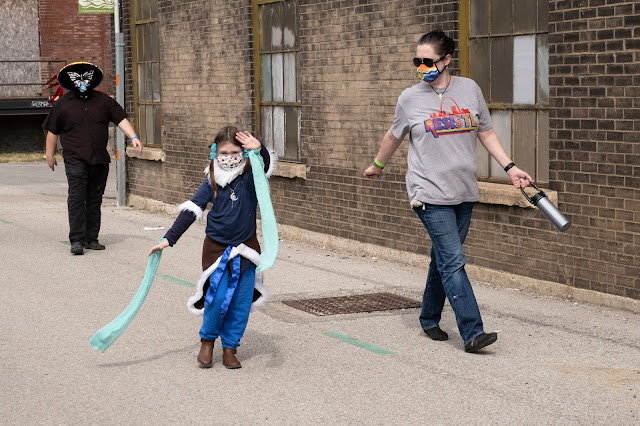 I never quite understood why but Artica always has a parade to the river starting at 1:11 PM (13.11 to the rest of the world). It was not as boisterous as usual this year, with limited turnout due to the state of the world. Ellie, however, was all in.

She wore her Halloween costume that daughter Emily, on the right, made for her. It is based on an animation series called Avatar. The structure is too complicated for me, but her costume is based on Korra, the avatar and water bender of the southern  tribe, https://avatar.fandom.com/wiki/Korra . Or something. When I was her age, I was stunned by Disney's Fantasia.

Precious .. and the mask adds to the costume.

I totally get it. My grandchildren are into various stuff like Pokeman cards. Those are incredibly complicated for me; who does what to whom, how they have various incarnations of their basic figure, but my grandkids know.

I think I've heard of it.