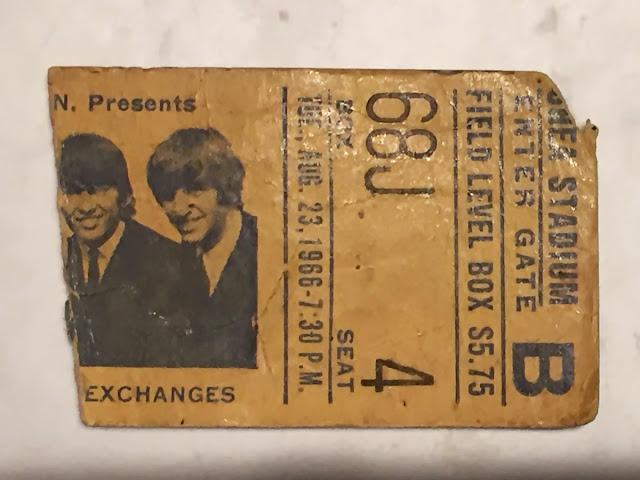 Had to do a bit of dumpster diving to find something for this theme day. This is my ticket stub from The Beatles second concert at the old Shea Stadium in New York, August 23, 1966. My sister and I went. The stadium was just a few stops down the Number 7 train line in Queens, where we lived. It would have been just before the start of my senior year of high school.

I remember some things about it. Mary Beth and I arrived early. The stands were already full of mostly 12 and 13 year old girls, screaming non-stop at the top of their lungs. Nothing was happening yet. And then there were the Beatles themselves on a stage behind second base. Couldn't see them very well but I remember the singing: yeah, yeah, yeah.
Posted by Bob Crowe at 12:01 AM

Very cool, Bob! I saw them here during that same tour at the Maple Leaf Gardens - couldn't hear much. I don't know where my ticket stub is!

All the concert footage I've seen of them have featured high pitched cheering on a nearly constant basis. Cool thing to still have, Bob!

Now that is what I call a fantastic memory.

Oh you have seen them' I have seen them in a canalboat when they visited Amsterdam. Only Ringo missed due to illness and he was replaced by an unknown drummer. I bit sas to have missed seeing Ringo, but when seeing Paul it made my day!

priceless memory! I still have my woodstock ticket

Yeah yeah yeah!!! What fun you lucky dog and my name is Marybeth but I am not your sister LOL
MB

What a fun memory, despite the ear-spliting screaming.

Wow! It is nice that you were there at that time. I only could stay at a Paul Mcartney concert 15years ago. I love The Beatles.
Your picture selected is the best for this Theme Day. Congrats!