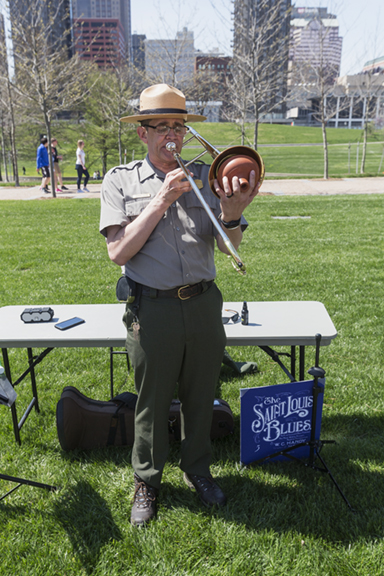 A National Park ranger plays the trombone on the Arch grounds. The whole area is a national park, technically the Jefferson National Expansion Memorial. It's about the 1803 purchase of a huge tract of land west of the Mississippi from France (including St. Louis)  by President Thomas Jefferson. It nearly doubled the size of the U.S. Napoleon needed money for his pastimes.

A trombone is rather less subtle than an blues harmonica but has more power. The ranger did a pretty good job.
Posted by Bob Crowe at 12:01 AM

I can imagine you'd hear that a long way off.

Napoleon's pastimes included picking fights with half the world, biting off more than he could chew, and over compensating for certain inadequacies. :)

I'm not sure I've ever seen a Park Ranger playing a trombone before.