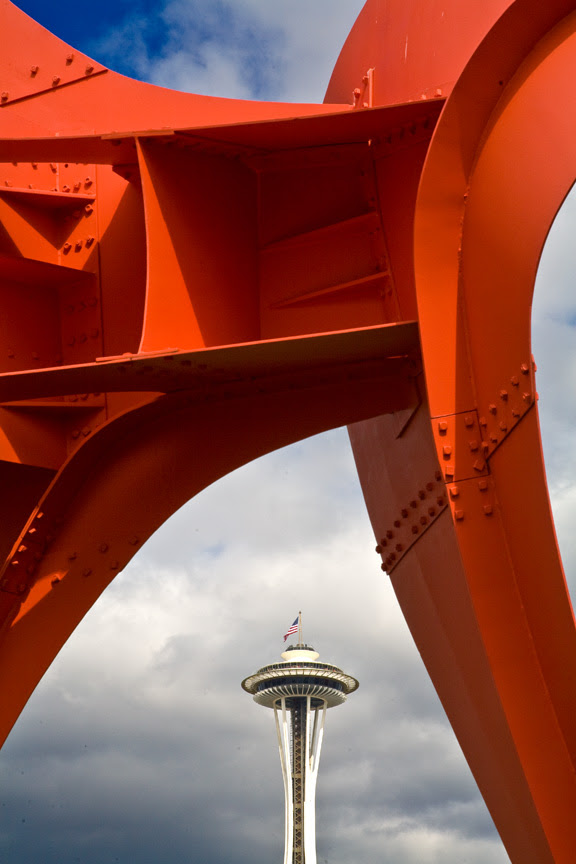 St. Louis - Dallas-Ft. Worth - Seattle today.  I was surprised I didn't have more pictures of the Emerald City on Flickr since we've been there so many times in the last 30 years. This is a 2008 shot. I remember an early trip when Carolyn, the kids and I did the Seattle - Vancouver - Victoria - Olympics circuit. We showed son Andy, then 4 or 5, a cartoonish map of the city and told him we were going to Seattle. "Where's Attle's house?" he demanded. I still don't know.

Into the wilderness tomorrow.

By the way, the local heroes, our St. Louis Cardinals, pulled off a stunning come from behind victory last night. They beat the Washington Nationals, the team with the best record in baseball during the regular season. Now they advance to the National League championship against the San Francisco Giants. Go Cards!
Posted by Bob Crowe at 12:01 AM

Great shot. Like the look through. Is the red structure some kind of statue?

Eeek. I am green with envy.

Is this a Alexander Calder's sculpture detail? Well, whatever it is, the composition is just super!

It was an amazing game. I do like how you framed this one.

That's a fab shot B. I'm sure you found Seattle couldn't hold a candle to B'ham. :)
V

Cute story about your son.

We had our art group over to our house last night, so I didn't get to see the game. I recorded it and am watching it on Saturday morning while I am checking my favorite Daily Photo sites.

I am now at the spot in the bottom of the 7th when the Cardinals have inched their way back from the 6 - 0 deficit to trail only 6 - 4.

The information in your post that informed me of the outcome of the game has ruined the suspense, but has given me the motivation to watch the rest of the game.

If you had disclosed that the Cardinals lost, I would turn off the TV right now.

Your Cards are truly unbelievable. I bet the youth in St Louis will grow up to believe anything is possible. Congrats.

I almost quit watching the game when the score was 6-0. Have a ticket to next Wednesday's game and can't wait!

Bob, you have barely been IN the jurisdiction in the past four months or so.

I turned the game off when the Nationals were ahead 6-0 and had chased Wainwright. I was shocked to read the paper this morning.

Superb photo and great story. I'll have to remember it. Looking for Attle's house in Seattle would be fun.