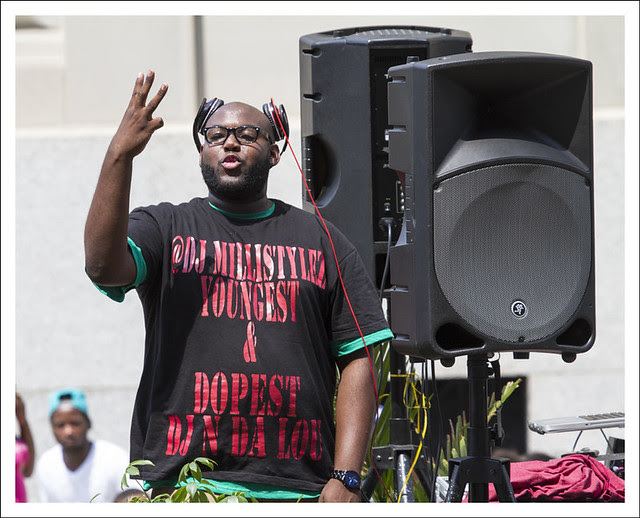 A last picture from the Annie Malone Parade. Tomorrow we turn to Memorial Day weekend events, starting with the Bluesweek festival.

This young man was riding in the back of a pickup truck. The speakers were blasting an electronic rhythm track. He chanted "three - one - four - THREE - ONE - FOUR" over and over again.  This may have puzzled out-of-towners and numerologists but it's just the local telephone area code.

I thought I understood the meaning of "dopest" in this context but to be sure I checked The Online Slang Dictionary. Just the latest kid variation on very good or cool. "Da Lou" is a nickname for the city for those under thirty. "The Lou" is the usage for the rest of us geezers.

Apologies for no comments yesterday. We were out late at Opera Theatre of St. Louis' production of Stephen Sondheim's Sweeny Todd. I get picky about such things but this was absolutely flawless. Locals should snatch up a ticket while any remain.
Posted by Bob Crowe at 12:01 AM

perhaps he needs help knowing where his ears are...

I have never seen such pride in one's area code.

Well especially with that tee-shirt, you need to get the sound right.

I am not taking any questions about this kind of music, Bob . . .

You just got to love young people and their terminology!! I'm still with the 'groovy baby' haha!!

Re VDP, if you are at the home page, the comment link is in orange at the right end of the line, near the bottom of each post, where it says "Published by VDP . . ." If you have clicked on the post itself, there is a big white comment space at the bottom after the most recent comment.