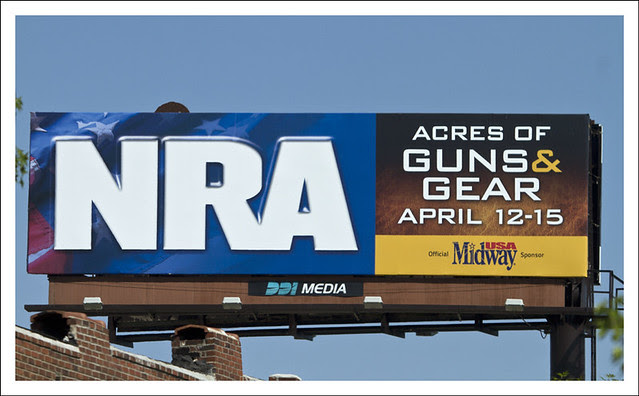 The National Rifle Association convention is in town this weekend. For our readers in other countries, this is the big time American gun club and lobbying group. Their most defining moment was when their late president, the actor Charlton Heston, said "I'll give you my gun when you pry it from my cold, dead hands."
This country has a long romantic relationship with guns: frontier spirit, hunting, my home is my castle, stand your ground - on and on. They are part of many people's life-long tradition. Me, I ave no interest in guns. They exist mostly for the purpose of killing some being. Now, years ago I tried plunking some beer cans with a .22. I've tried shooting clay pigeons with a shotgun along with my brothers-in-law and nephews, all delightful people, on the old family farm in Kansas. (I can't hit a tree, let alone a moving target.) But there may be 75-80,000 people at this convention and Missouri allows anyone with a permit to carry a concealed hand gun. And Mitt Romney is in town today to speak to them. Too scary.

So, Mrs. C and I are heading out of town for the weekend to the picturesque village of Ste. Genevieve, an hour down river. I think it was the first French settlement west of the Mississippi. Plus which, Saturday is our anniversary. (Number 38, thank you.) I think I'll put off more of the lady ruggers till next week. Today is the home opening game for the defending baseball champions, our St. Louis Cardinals. Your faithful blogger will be there with, um, several lenses. Pix of that on Saturday and Ste. Gen by Sunday.
Posted by Bob Crowe at 12:01 AM

Have fun on the trip!

I'd want to get out of town myself!

Ah yes, the thing most of us regard as so strange... Have a wonderful weekend!

Get outta town is a good idea with all the fools with guns concealed and non concealed. No wonder I feel safe to walk the streets of Paris at night, even alone.

Happy Anniversary to two of my favorite people!
V

I think you had the right idea leaving town for the weekend Bob, and St Genevieve looks delightful!