The Love That Damn Well Dares To Speak Its Name 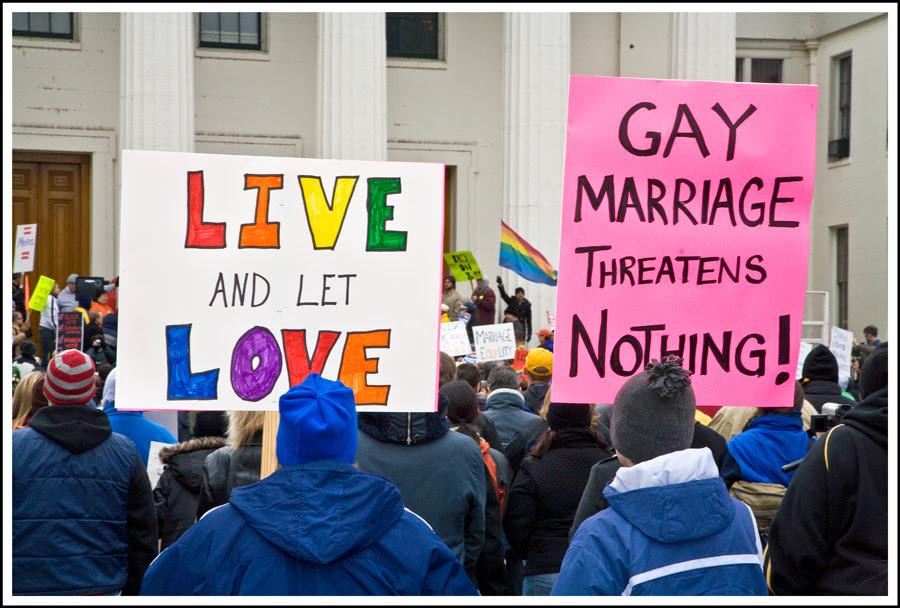 I was at my office Saturday playing the desperate game of catch-up when I walked over to the window. Twenty-three floors down and a couple of blocks away, I saw a rally on the steps of the Old Courthouse spilling over to Kiener Plaza across the street. Grabbed the camera and zipped on over.


As most Americans know, one of the things that happened on Election Day was a referendum in California that defined marriage as the union of one man and one woman, which is to say, no gay marriage. It had been legal in California for a brief time after a ruling by the state Supreme Court. Only two other states, Massachusetts and Connecticut, permit it. Gay and lesbian communities without the country reacted to the vote with outrage. Demonstrations were held throughout the country on Saturday. I'm not going to take a position on the issue in this post. Tell us what you think of these images and the questions behind them.
WHAT HAPENED SUNDAY: the sun came out, the temperature moderated and I got some some great pix around downtown, including the big croquet wicket.

TOMORROW: the people at the rally. 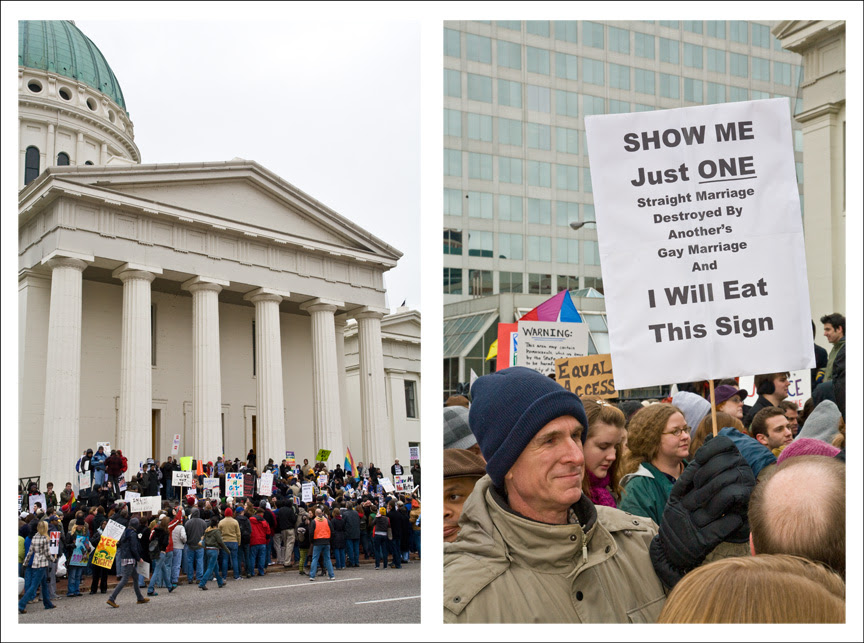 I agree with these demonstrators. I can see no threat to marriage if gays and lesbians are allowed to marry. As long as marriage is a legal arrangement, it belongs to everyone.

I have an opinion. Not too well formed like most of my opinions and for the time being I'm keeping it to myself.

In BC gays can marry.

I believe the pink sign says it all, "Gay Marriage Harms Nothing". And yes, gay marriage has been legal in BC for years, it's a non-issue here. Intolerance is one of the reasons my wife and I immigrated from Tennessee. The US has lost basic separation of Church and State. The latter has no place in civil matters and to deny gays the right to wed is no different than denying blacks or women the right to vote. Let's hope that the American people come to their senses sometime soon.

You should check out Eric's post today over at Salt Lake City Daily Photo.

Correction: I meant the former, as in the Church, has no place in civil matters.

Florida passed the same amendment this last time around, I voted against it, and we haven't heard much in the way of protests, yet. The Episcopal Church is fracturing over this particular aspect of the issue of "human sexuality" and I'm happy to let the fracture happen and be done with. I don't know that my home church will ever enter the fray but I know what side I'll choose and what path I'll take. I'm not there to be a Christian, I'm there to learn to be Christ-like, two different things.

Nov. 4 was an historic day in America. We elected a black man to be president and a state passed a referendum that will write discrimination into its constitution--a first on both counts. The former is cause for celebration, the latter is cause for sadness.

Having said that, I also have a personal interest in this because 1) I grew up in the Mormon Church and 2) I am a lesbian living in a domestic partnership. I am deeply saddened (and find it grossly ironic) that the church I grew up in would spend $20 million dollars on this issue and it outrages me that issues like hospital visitation rights, health insurance, and other rights straight couples take for granted are being denied to me and my partner. We've been together nearly eight years and so far, I don't know a single, straight couple whose marriage we've threatened by virtue of our relationship. In fact, we have many straight friends who admire our relationship and see us as a model of commitment and loving kindness toward one another. Who and how is that hurting anyone?

I'm with the person holding the sign that says she'll eat her sign of someone can show her "one straight marriage destroyed by another's gay marriage."

Thanks for coming by my blog today and leaving such nice words. It is nice to meet you.
I love the sign that says "I will eat this sign"!
I look forward to seeing more of your photos.

On this subject, I have no personal stake.
I just hate injustice and faith based intolerance. I suppose that growing up in Utah has desensitized me, somewhat, to intolerance. This issue has shown me how indifferent I have become over the years. It was a bit of a rude awakening.

Standing up for something is a scary thing but if I don't stand up beside those that are the victims of discrimination, then there will be no one left to stand beside me when they come for my civil rights.

Wow... I guess I have a personal stake after all.

I think all of this is designed to lead to having state and perhaps Federal laws changed. Or it seems like some state laws have to change before this can happen and be satisfactory to all. We have a gays in our family so we are well aware of what is going on and the reality of it.

I think a lot of us are amazed the vote went against in California - and appalled. In France we have a PACS - a civil arrangement whereby both partners in a gay relationship have the same rights as married people. It's ludicrous in this day and age that marriage between gays is not allowed. I totally agree with the signs you've photographed. Well done Bob.

DC Confidential - I hadn't read your words or realised that was you holding up that GREAT sign - until Bob linked to it in today's post. Just to say I love the way you expressed the situation - am in complete agreement.