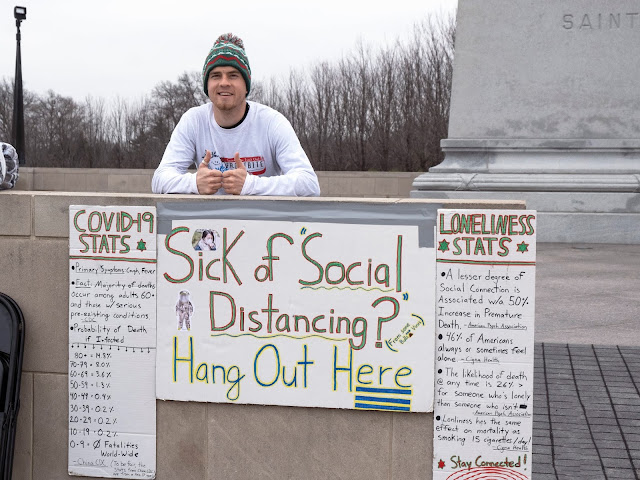 Before our not-very-strict stay at home order went into effect, I went cruising around town hoarding photographs like some people amass toilet paper. As I drove by the front of the closed art museum I did a double take.

Across the lane, under the statue of St. Louis, I met David. He had quit his job as an emergency medical technician (!) a few weeks ago, spent some time out on Missouri's Ozark trails, came home and decided not to be a hermit. He had set up a folding table full of granola bars and other snacks along with an ice bucket of flavored sparkling water. He was asking a dollar for them, implying he had gotten them for less at Sam's, but was giving them away on Monday. Then there was this display.

I still had lots of questions but other people walked by and engaged him. Why did he quit his important job? What motivated him to set up this display? What is he going to do with himself now? I hope he stays well.
Posted by Bob Crowe at 12:01 AM

He might need to go back to work the way things are going.