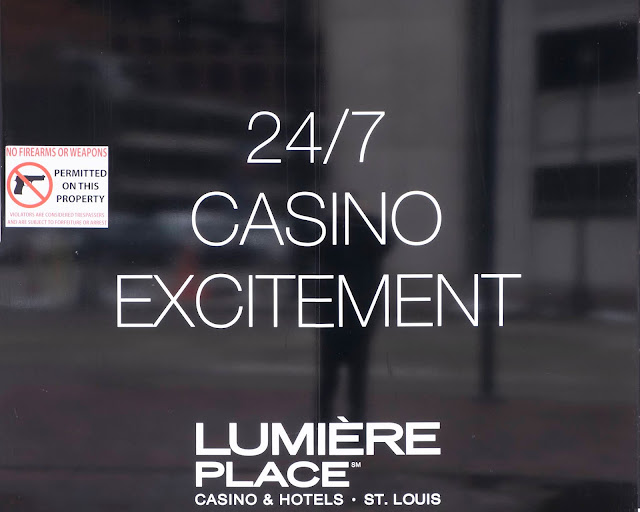 Time to be back on the streets of The Lou, although I may still run some Costa Rica pix if I'm short of material. Anyway, my office is a couple of blocks from our football dome without a football team. (Many Americans would know the story and nobody else will care.) The Rolling Stones are going on tour again this year (what, with their walkers?) and it was announced yesterday that they would play here in June. On Wednesday the big LED sign in front of the stadium had a teaser display of the iconic lips and tongue logo with the single word "When?". I walked over yesterday, hoping to find some version of that but no luck.

We have a lot of casinos around here, six, I believe, on or next to the rivers. The one downtown is cut off from the city by a major highway but there is an entrance and underground tunnel across from the dome. Couldn't pass up this image. We hope the casino is exciting enough without gunplay.
Posted by Bob Crowe at 12:01 AM

We have a casino over on the Quebec side of the river, and a scaled down version, slots and such, at a racetrack. That's about it.