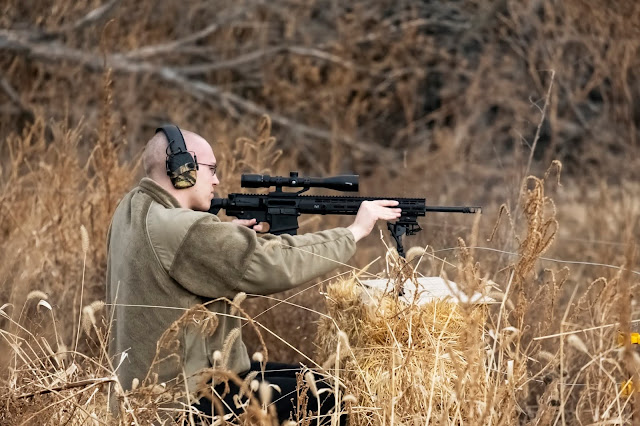 There is something of a family tradition on the farm the day after Thanksgiving, but it has changed over the years. The younger men and a few of the women would go out in the nearby fields to hunt quail. After restrictions were imposed on hunting coyotes the quail population fell. For a couple of years someone would go out early on that Friday morning and buy a few boxes of quail (heaven knows where) and then scatter them in the bushes. The hunt resumed. I used to joke with the guys that I was better armed: they had shotguns but I had a Canon.
Eventually the marksmen turned to shooting clay pigeons. (See https://flic.kr/p/dvLvNN). As the years passed and most of that generation had families, the turnout decreased. Now it's just target practice out behind the house with whoever is around. This is my nephew who graduated from West Point last spring, Lieutenant Joshua Kruse. He is supposed to know how to use these things.

Not making any comment about guns here. No one in my immediate family has ever owned one. It is an integral part of the culture in rural Kansas. My relatives there use them with the highest safety standards.
Posted by Bob Crowe at 12:01 AM

He looks at ease with it.

I grew up in Nebo, IL, 20 miles from the Mississippi. My dad was an excellent shot, was in WW2 as a bay gunner, had to practice with guns on the range. Dad took friends out to hunt ducks and geese. He didn't like to hunt anymore, but he did with his friends.