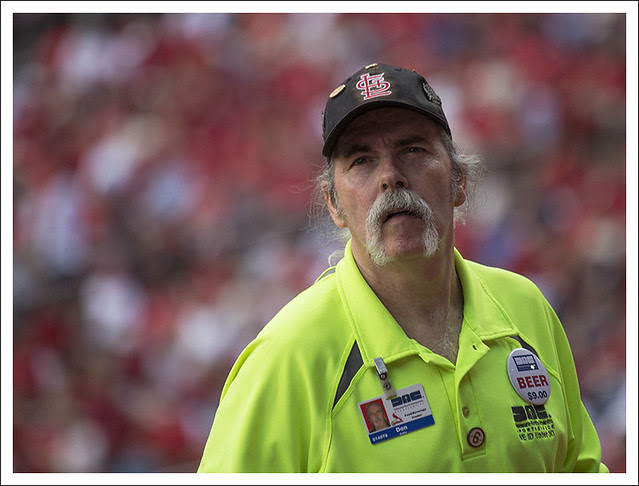 But to some, one of the most important people in the stadium. Look closely at the button on his left shoulder - BEER $9. Now I like a beer at the ball game as much as the next guy but it's past the point where I'm willing to pay their price. (I don't like Budweiser anyway.) Do I have $9 in my pocket? Sure. Is 14 ounces of bland brew worth that much to me? No way. Won't pay it. To the Cardinals' credit, though, Busch is one of the shrinking number of stadiums that let you bring in your own water and food. In lots of other cities it's pay the hot dog ransom or starve.
Posted by Bob Crowe at 12:01 AM

And Diet Cokes are expensive, too.

That guy looks like Al Hrabosky. Well, at least the moustache. In AZ we can bring in water and peanuts. My nephew would go to Reds games in Cincinnati and he would sign a pledge to be a designated driver. They would then sell him O'douls for $2. He just wanted the taste, not the alcohol.

A lot of character in that face.

I have no idea what the prices would be over in the Skydome, or whatever they're calling it these days, but it'd still be steep.

I'm amazed that you can bring any food or beverage at all into the stadium.

That is a lot of money for a beer. Too much. Way too much. Skål.