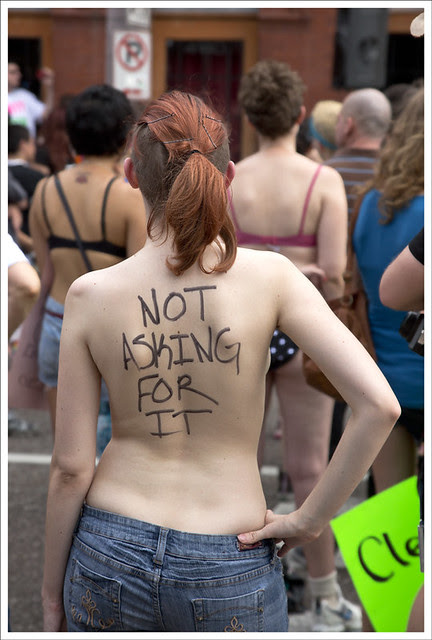 That's exactly what it's called. A rally and march in The Grove neighborhood based on a movement began in Toronto just 15 months ago. According to the Wikipedia article:


The SlutWalk protest marches began on April 3, 2011, in Toronto, Ontario, Canada, and became a movement of rallies across the world. Participants protest against explaining or excusing rape by referring to any aspect of a woman's appearance. The rallies began when Constable Michael Sanguinetti, a Toronto Police officer, suggested that to remain safe, "women should avoid dressing like sluts." The protest takes the form of a march, mainly by young women, where some dress provocatively, like sluts. There are also speaker meetings and workshops. Some objectors have remarked that this approach is an example of women defining their sexuality in male terms.

Not all commentators see this in a positive light:

There have been a number of responses to the SlutWalk phenomenon, not all of them positive. For example, Australian commentator Andrew Bolt observed that guidance on how to dress in any given context is simply risk management, and such advice need not exclude opposition to victim-blaming. Rod Liddle agrees, saying "...I have a perfect right to leave my windows open when I nip to the shops for some fags, without being burgled. It doesn’t lessen the guilt of the burglar that I’ve left my window open, or even remotely suggest that I was deserving of being burgled. Just that it was more likely to happen." Mike Strobel even suggests that the approach SlutWalk is advocating is dangerous, and he would not advise a daughter to dress "provocatively in iffy circumstances." But Jessica Valenti says: "The idea that women’s clothing has some bearing on whether they will be raped is a dangerous myth feminists have tried to debunk for decades."

St. Louis had its first march in June 2011. Its second was last Saturday. The intention is something everyone supports but its method is full of issues.

More to come. What's your reaction? 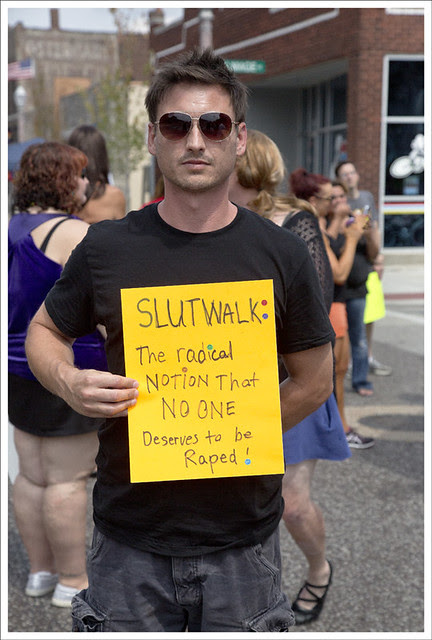 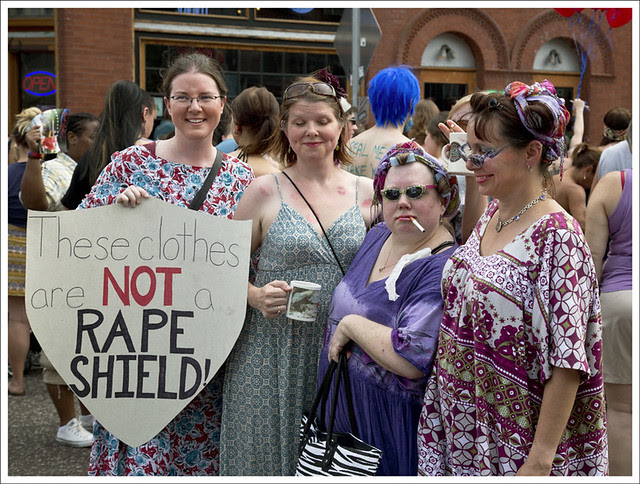 Wow this really woke me up. Great post! Love these people. Yay. More power to 'em

Rape will happen no matter how you're dressed...

That looks to be one crazy broad with the ciggy. I'd NOT mess with that!

I agree with Ciel, if a man is of the mentality to rape someone, he will do it whatever and still feel that in some way she was asking for it! I can see how the statement by Michael Sanguinetti would enrage, men walk around in summer half naked all the time and I'm sure the idea of rape wouldn't enter a womans mind! Love that last image Bob!
p.s. I was watching the news today, gosh you guys really are having some shockingly hot weather with more to come by the look of it. Not much fun!

Cieldequimper has it right.

The closest experience to this that I have seen in Costa Rica is one time I was walking along a quiet beach and some folks had apparently found the beach so inviting they decided to take a swim when they had not brought their swim suits.

They have this event in Vancouver. I haven't avoided it but it hasn't been on my radar the day of either.

The blame for a rape rests only with the person committing the act. Period. Try telling that to the apologists or misogynists who claim that a victim bears some responsibility for dressing provocatively, or even saying that men "can't help themselves"... that's insulting to women and to men alike.

Great pics, by the way, Bob.