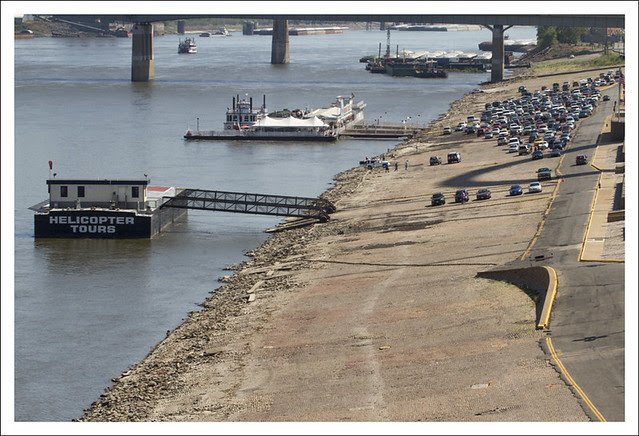 The center of the U.S. is drier than Jame Bond's martini. Later this summer the water level in the Mississippi might be the lowest since records have been kept. It's not a problem downtown, where these photos were taken, but there are now sand bars in the river north and south of here that interfere with barge navigation.

It's not unusual to have room for three or four cars across to park on the stone levee. Now the water is past the level where the levee starts to disintegrate because it's so seldom exposed. When the river rises, everything you can see in the top picture is covered, and then some.

Note the shadow of the Arch in the top photo. Oh, and pray for rain. 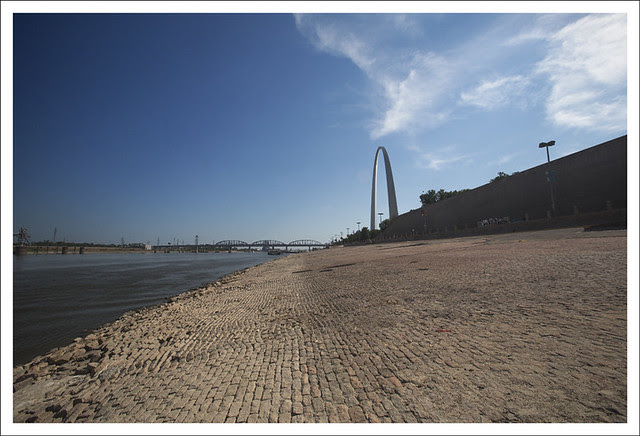 Great shots again and on the second photo the arch still as an enormous sculpture gets a little more human scale in the wide overall.

Love that arch shot. Maine's been dry BUT not like the rest of the country. Compared to St. Lou, summer has been sunny, warm but comfortable for the most part, cool evenings. It'll be a 'cool' break for you.

Those are some powerful photos. Thanks to your blog I've been following for a few months now I want to see the Arch. I'm planning a road trip this fall, eastward bound to I-don't-know-where but the Arch is one goal, as much as I abhor passing through major cities. I suppose I will be seeing the River at it's lowest too while I am at it.

It's a sorry sight when a river is so low Bob, I really do hope you get some much need rain soon. Quelle surprise de voir l'Arc le lundi!

You could have some of the rain we have gathered this summer.

It's becoming alarming at how much the dry spells are continuing.

There have been such alarming swings in the weather. Was it last year when the Army Corps had to decide which areas to flood by breaching levees upstream, so that the large downstream cities weren't flooded out? Averages are just ways of leveling out extremes.

Love the new Arch shot with the cobblestone foreground. Weather has been so extreme that I wouldn't be surprised if next winter was super wet. Like you we went from a very wet winter to a very dry one. Fingers crossed for next year.

Cool shadow of the arch - thanks for pointing to it, I would have missed it.

Having worked as a deckhand on the Mississippi for many years, those cobblestones look very familar.