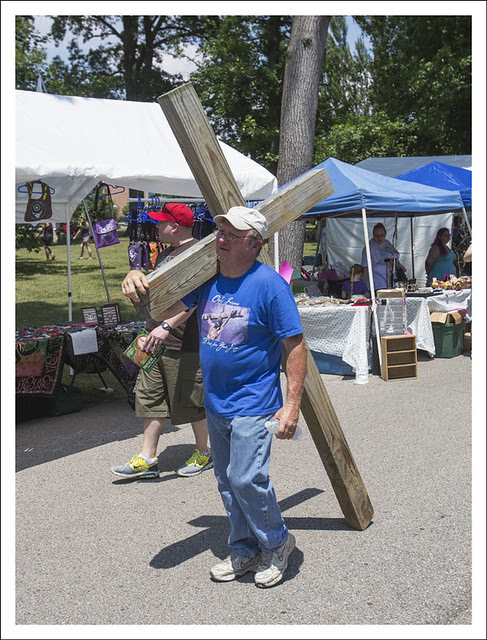 Lots of Americans think of St. Louis as a rather dull, mid-size, Midwestern city that has a better-than-average baseball team but otherwise is on a downward slope. Not so. There's weirdness all around, if you keep your eyes open.

I saw something in the weekly events section of the paper about the 10th annual Pagan Picnic in Tower Grove Park. What? I've been running this blog for almost five and a half years and it's gotten under my radar. It wasn't very big but it was reasonably strange. There was a lonely anti-pagan walking up and down, getting no attention from anyone (there are some other similar people around town). They apparently do a quilt for each year's event. What would happen if you curled up in this on a cold winter night?

You cant see it clearly in this picture but the man in the back of the top picture is carrying a book titled "Natural Witchery." I might consider the Kindle edition. 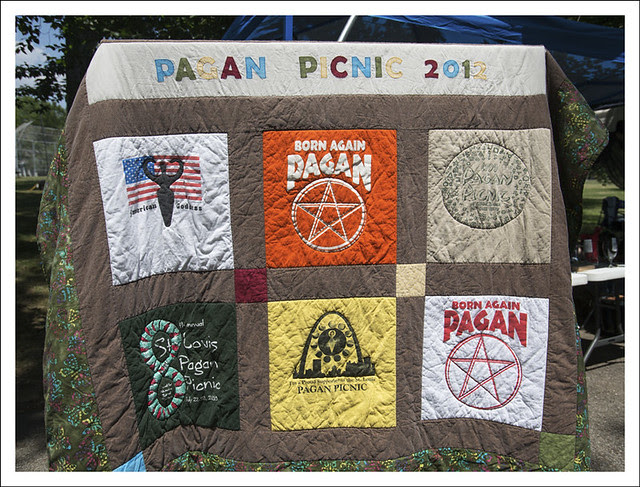 I suppose carrying a cross is exercise of sorts...

We all have OUR cross to bear. The Jesuits taught us well.

With some of the pageants and festivals you have going on there Bob, I wouldn't describe St. Louis as dull.

I don't know what this says about Vancouver but a couple of weeks ago I saw a guy carrying a similar cross along E. 41st. I would have had to do a bit of running to catch up with him. Now I wish I'd made the effort.

This post reminds me of the baseball player named Angel Pagan. He must have been very confused as a kid.

Pagans . . . Now, here is a topic about which I know absolutely nothing. And I like it that way.

Midwesterners have inferiority complexes. Get your chin up and stick your chest out, man, and be proud!