RETURN OF THE THURSDAY ARCH SERIES 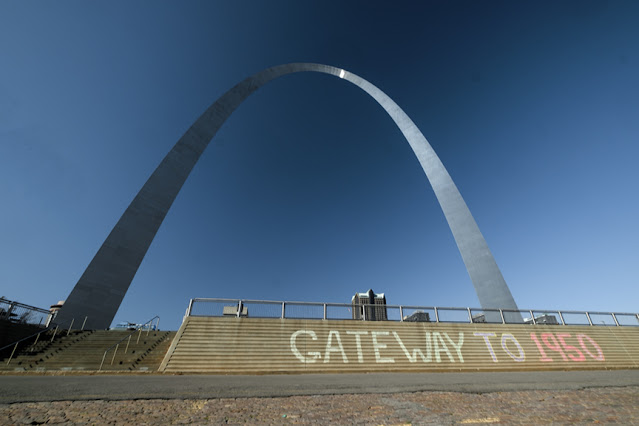 I used to post a photo of the Gateway Arch on most Thursdays. However, after 20-something years of digital photography (early adopter) and many thousands of shots of this thing, it's hard to come up with something new. This caught my eye, though, when I was walking around on the levee. I have no idea what the reference is. As far as I know, nothing special happened here in 1950. The planning, design competition, engineering and construction of the Arch spanned decades. It was opened to the public only a couple of months before I showed up here for college in 1967.

In a sense, 1950 was my gateway to here, being the year that the universe dropped me off by another big river, the Hudson, with no hint that I would spend most of my life just west of the Mississippi.

Well, back when the muddy Miss was flowing strong, we might have been two tugs passing in the night...poetic stretching I know! I arrived in St. Lou in 1950! And left in 1963! So actually we never would have met until now, after all!