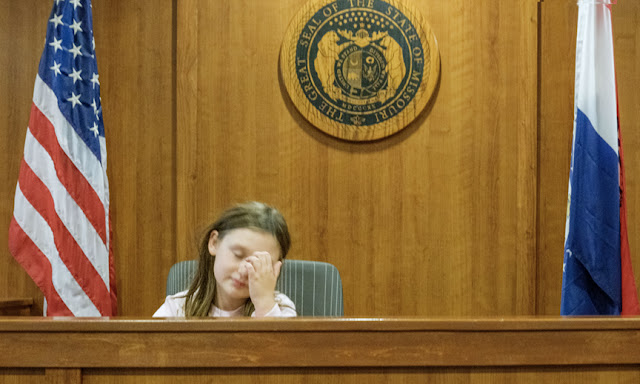 On Saturday I took Ellie to The Magic House, STL's children's museum. One section is about the divisions of government, with mock-ups of a courtroom, the president's oval office and a legislative chamber. Here she sits in the judge's bench, head in hand, perhaps thinking about the state of our state.

Tomorrow is election day in the U.S. Yes, it's odd to do it on a Tuesday but it has something to do with market days in agrarian post-colonial times. Lots of us, perhaps including my granddaughter, are terribly worried about the erosion of democracy in our country. Missouri has an open U.S. Senate seat. Not that the Democratic candidate is so great but, to everyone in this household, the Republican is a horror. This isn't the place for details but, in general, I could never vote for a candidate of a party that has lost its mind. There, I said it: the occasional rant.