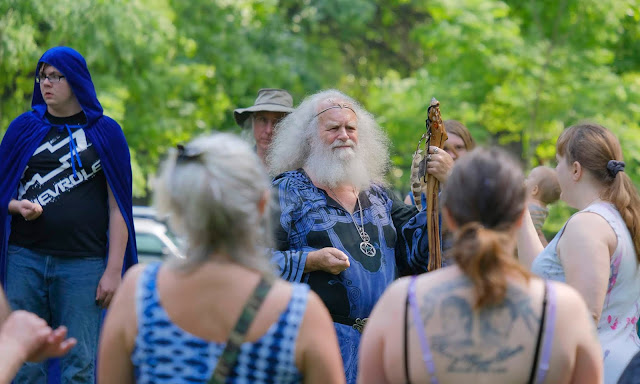 This is the area of the Pagan Picnic called the Bardic Circle. To me, a bard is a poetic storyteller, e.g., the Bard of Avon. These folks were not recounting legends but standing in a circle with palms upward, or walking in concentric circles chanting things I couldn't quite understand (maybe on a few levels). Lots going on at this event about goddesses but this event had a dude in charge. Looks like a grayer version of Charlton Heston in The Ten Commandments.

It was fashionable to wear a Druidic cape with a hood but only if balanced with a Chevrolet tee shirt.
Posted by Bob Crowe at 12:01 AM

Indeed he looks like a chubbier version of Charlton Heston. I had a major crush on him when I was young, but then his NRA stance and political views got in the way....

Good framing of your photo.

I don't think I would get it myself.