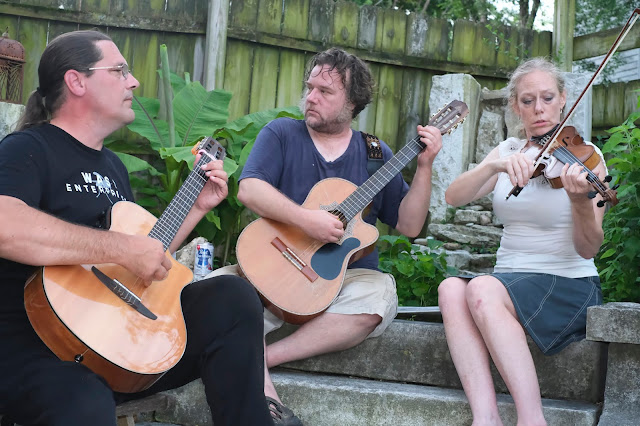 My friends Lohr Barkley and Carrie Goodson are the propelling force behind Artica. For the last several months they have hosted a creatives pot luck dinner on the last Thursday of the month at the old brick building they are renovating into their home. It was very pleasant last night, not so common at this time of year. Several people brought musical instruments. Celebrate summer. That can of PBR didn't hurt.

I have more good images if I can find time to edit them. I am shooting the Grand Center Theater Crawl tonight and tomorrow. Sunday is the Pride Parade, the don't miss photo op of the year. Then we get into the Fourth of July stuff, with the enormous Fair St. Louis downtown and a more manageable festival in Webster Groves, the suburb where we live. Sometimes I complain about lack of material. Soon I'll have enough to blow out my hard drive.
Posted by Bob Crowe at 12:15 PM

You're going to be busy.