Friends Of The Maytag Repairman 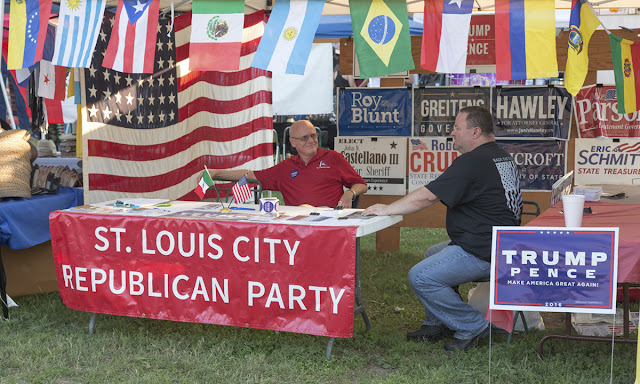 Americans, except for the very young, remember the famous TV ads featuring the Maytag repairman. The idea was that he was lonely because no one ever called him, ostensibly because Maytag appliances were so dependable.

Well, there are not a lot of Republicans in the City of St. Louis. (Much of the rest of the state is a different story.) Their table at the Hispanic Festival gets about as many visits as the Maytag repairman. They are certainly enthusiastic, out expressing their point of view, surrounded by posters for candidates there is zero chance I will vote for and flags of Latin American nations (me gusta mucho Costa Rica y Argentina).

But note the Trump poster and then the Mexican flag on the table. Cognitive dissonance?
Posted by Bob Crowe at 12:01 AM

I'm sure I'm not alone as a non American who can't even believe how this situation has happened Bob, I always thought that for a position of the highest importance there would have to be some knowledge and experience of world politics necessary, apparently not so 😊

I guess they're talking strategy :) Looks like a long day for these boys.

I would be inclined to remark to them that Lincoln, Teddy Roosevelt, and Eisenhower would be horrified by what the current day party has become.