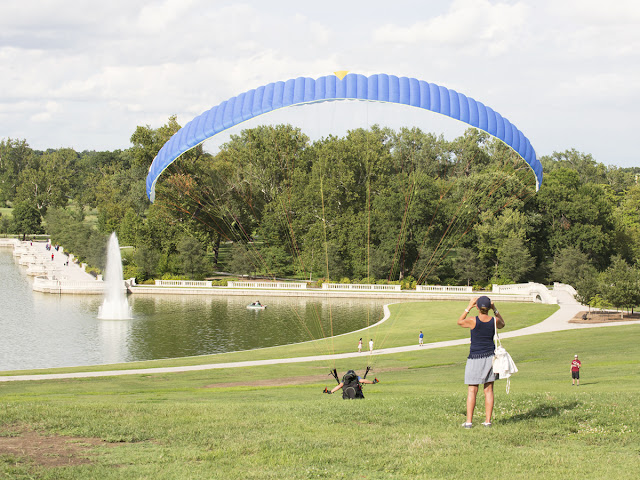 Another airborne device on Art Hill. I watched with interest as this man carefully unpacked and spread out his parasail. The wind was favorable, essentially blowing up the hill from the Grand Lagoon. He put on the harness and gave the whole thing a tug. The wind filled the sail and he, well, just kinda walked down the hill with the wing floating above him.

I thought it was terribly disappointing. I expected him to lift up on a thermal, float over the lagoon and then then soar off toward the airport or something. (Which would have resulted in either danger or great amusement. A good story in either event.) Maybe my standards are too high.
Posted by Bob Crowe at 12:01 AM

OK so this was disappointing to you but that's how you learn the job. Before the instructor lets you fly on your own, you spend days doing exactly that: unpacking your bag, making sure your lines aren't tangled up, spreading the sail right, face to the wind, and then tugging hard to get it up, and then running down a hill with the sail above you, trying to understand the effect of your actions when you pull one handle or the other. My husband did this for days on end before he was allowed alone in the sky. Exhausting. You can do that with your kids too, it's a great way to give them some pretty cool sensations. You just keep a line on the whole thing and you fly your kids like you'd fly a kite!

As for this guy I'm not sure what his objective was. Perhaps he'd just bought the wing and wanted to put it up?

Or perhaps he was still a learner and was given a sail to practice on his own, in between lessons? My husband had done such an arrangement with his parasailing school.

I imagine Nathalie is right on this one. That would be fun!

I'll watch thank you or be on the sidelines like you ready for an interesting image. Your right though, it makes for a good story! Up, up and away :)