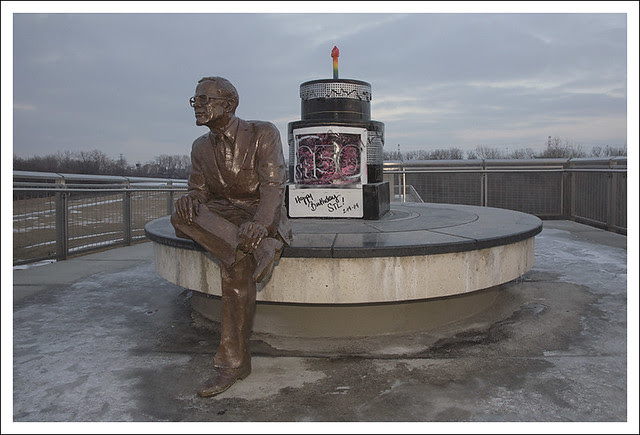 The late Malcolm Martin was a lawyer in downtown St. Louis for many years. We used to work in the same building and I knew who he was, even if I didn't know him. Never married, no children. He created a trust to buy the land in East St. Louis, Illinois, directly opposite the Arch, to preserve the view of downtown for the public. An overlook was built there (seen here a number of times before), graced by his dapper statue.

Martin and the overlook got one of the first STL250 birthday cakes. It's designed to look like a camera (no idea why). There will be more of it later because, when you walk around to the back, the Arch frames it very nicely. 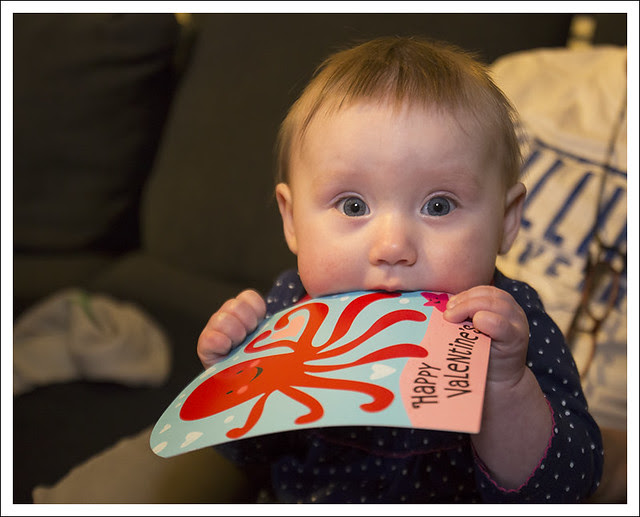 The tyke with her first Valentine's card, sent by Grandma Crowe. I think she'll have a taste for calamari when she grows up.
Posted by Bob Crowe at 12:01 AM

I'm loving these birthday cakes, Bob. Brilliant idea! And of course your adorable grandchild and the octopus.

His birthday cake is particularly beautiful.

I hope the little darling will love calamari!

Love the statue, but Madeleine steals the show.

Madeleine is gorgeous! Love seeing the Arch from there.

I'm enjoying both of your portraits today. One's taste for calamari sometimes need to be nurtured young.

Sweet shot of the little one!

That's a good cake, and a very distinctive statue.

Three cheers for Malcolm! And his cake! And the little nibbler, Madeleine.