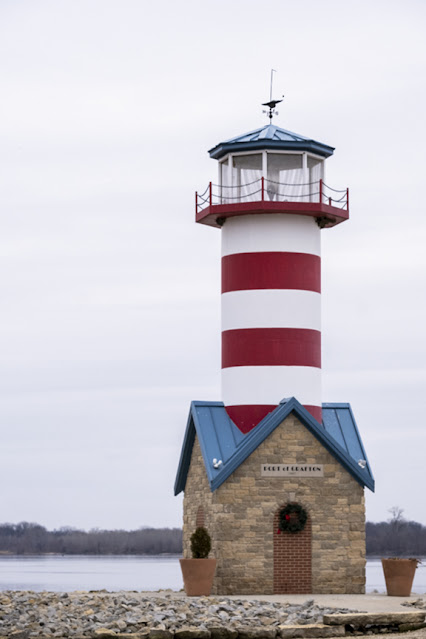 This pic was taken on the same day as the last few posts, some distance north at the old river town of Grafton, Illinois. Long ago there was a booming boat building industry. Times and technology change. The big hit came from the Great Flood of 1993. We flew out of STL at the height of it and it looked like there was a sixth great lake around the confluence of the Mississippi, Missouri and Illinois rivers.

Part of Grafton is along the riverside and part up the bluffs. The low lying parts were inundated while the section on the hills survived. The population went from something over 1,000 to 600. There is no need for a lighthouse on the river. The pushboats' GPS navigation systems are all that's needed. The lighthouse is just a symbol of return.

Old technic may not be smart but wil work when all smart devices doesn't work anymore.

I like the wreath on the bricked up door on the lighthouse...hopefully there's another doorway. I also like the colorful paint job!

When I was a kid, I remember touring the Chris-Craft boat factory with my parents. My dad was toying with the idea of buying a boat. That never happened. However when I was teenager, he bought an amphibious car. That pretty much made him the talk of the town.