THE ONLY PICTURE I GOT FROM THE FRINGE FESTIVAL 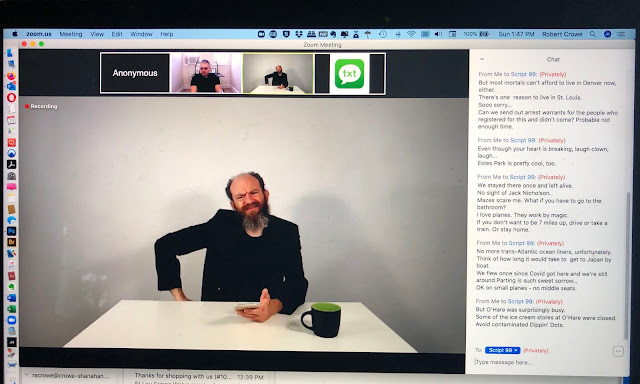 Like many cities, St. Louis has a Fringe Festival for out-there performing arts. I've been the house photographer for awhile. It's all modeled on the original Edinburgh Fringe.

No live performances this year, of course. Ours decided to go virtual, with all performances on Zoom. (You had to buy a ticket to get an access code.) One, called #txtshow, had a clever premise. A performance artist hosted the meeting. Participants were asked to turn off their microphones and cameras and rename themselves as Anonymous. Everyone could then send chat messages to the user just called txt. The host would read them aloud. Since the messages were all anonymous, the discussion could get wild and raucous.

But you need a bunch of participants to make this work. When I joined on Sunday afternoon there was only me. The second box above is the Fringe's director, the third is the host and the fourth place to send messages. I felt sorry for the guy and hung in to the end, just making inane comments in the chatbox on the right and listening to his responses. Disappointing. It could have been a lot of fun. As it was winding up I took this shot with my phone.

Comedy is hard at the best of times Bob, I can't imagine what it must be like on zoom 😁

I can see that being challenging.