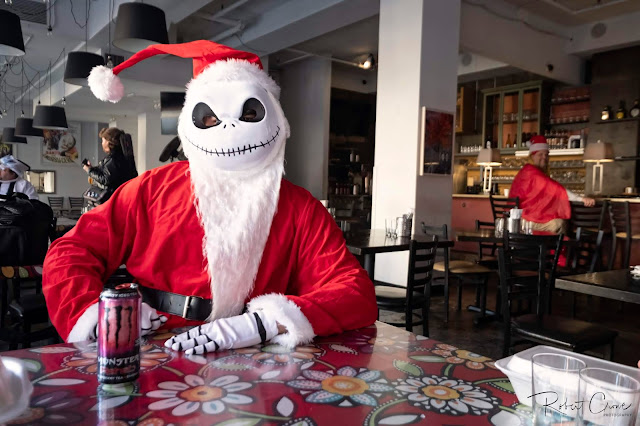 I traveled with the Santarchy company from about noon to six. There was a breakfast earlier and a few other stops before I met them at the Fortune Teller Bar on Cherokee Street. My arthritis was bothering me enough that I left after I took yesterday's picture. The rolling party went on downtown and in Soulard until late into the night. I'm too old for that.

This picture was taken at Lucha in Grand Center, which describes itself as Mexican soul food. Except the owner is Sri Lankan. I eat there a lot during the Fringe Festival. This reveler was doing a Nightmare Before Christmas theme. I couldn't identify it but my granddaughter knew it instantly.

Note the beverage in front of him.
Posted by Bob Crowe at 12:01 AM

You need an energy drink if you're running about all that time.