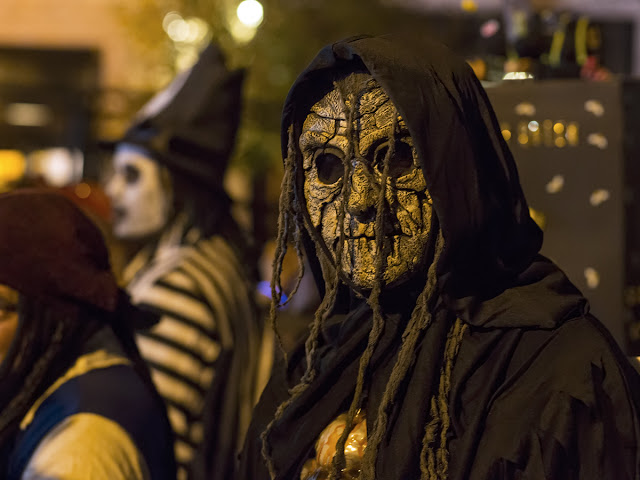 Happy Halloween to those of you who enjoy it. I got out for a while Saturday to shoot the massive street party in our Central West End district. Not the best year for images at the event. It gets more crowded every year and I had some kind of bug. Still, there were a few keepers.

This isn't a holiday that appeals to me. I don't like being scared, naturally or artificially. No slasher movies, no Trump websites.   As far as I'm concerned, you can save all these grisly memento mori references for an ascetic monk's hut.

Goofy costumes are okay. The only time I've done that as an adult was at a party thrown by a colleague. I made a mitre out of cardboard, put MasterCard and Visa logos on it, bought a Los Angeles Angels baseball jersey and went as the pope.

Grim-looking chap. I almost joked with you and asked if it was a Halloween selfie. I actually like Halloween....especially the ones of my youth. Then along came Jamie Lee Curtis and those films, which at the time I liked. Now, like you, I find Trump just perfect for a good scare....and the right color, too. Hope that's not a racist remark....but I truly hope he will not continue to haunt us in one way or another after Nov.8th....

What a great photo this is!

Pretty creepy! Better than a clown, though.