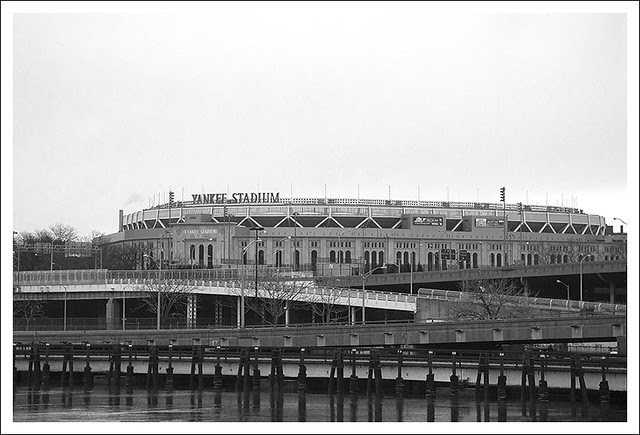 Is a wonderful town. The Bronx is up and the Battery's down. The people ride in a hole in the ground. New York, New York! Ah, back home.

We usually rent a car at La Guardia and drive over to New Jersey where my sister lives. It's always been expensive but this year the price of a Toyota Corolla (little) for three days was $500. Not paying it. We were going to take the bus to Penn Station and the commuter train to my sister's town but my nice brother-in-law sent over a car service. I'm always the one who drives this route and never get to take pictures out the window.

Above, Yankee Stadium from across the Harlem River. Below, crossing the Robert F. Kennedy Bridge, or just RFK Bridge, from Queens to Manhattan. The sign is local New York code - 8 minutes drive from that point to the George Washington Bridge that goes to New Jersey, via Manhattan and the Harlem River Drive. You could go via The Bronx and the Major Deegan Expressway but I wouldn't recommend it.


Bottom, your airport moment of zen. 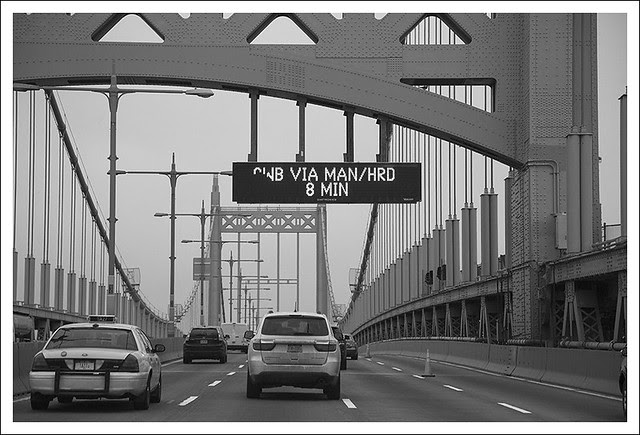 So how long did you wait for your luggage?

I love the black and white ones because they gives me the immediate fifties feeling although the bridge looks a bit to clean for that period. And yes the zen moment what can I say .

Glad you were able to take photos this time, Bob. The b&w shots are just great.

Car Service. That's cool! We've been taking the bus in from Weehawken lately. Really easy in; easy out.

Just wanted to thank you for your dedication to the blog. I look forward to your post every morning. Happy New Year Bob

I flew into LaGuardia one night, years ago, with a fellow author. We were approached by a gypsy cab driver. Even though she was a native New Yorker, she fell for it! There we were, standing by as he loaded our bags into the trunk of his cab...while a policeman was at the front of it, writing him a ticket. I still wonder what he would have charged us, had we not grabbed our bags and run!

I learned something from your first photo. I might have seen Yankee Stadium and said, "Darn, the pedestrian bridges in front are in the way." Seeing your photo, I see that one can make the obstacles part of the pattern. Nice job.

Love this BW; no one around, either!

500 bucks for a Toyota Corolla for 3 days? Merry Christmas!

Well at least it turned a blessing, you got to take pictures along the ride instead of driving!

The video left me gaping: only in America!

I look forward to your next shots of the big apple.