Fork In The Road 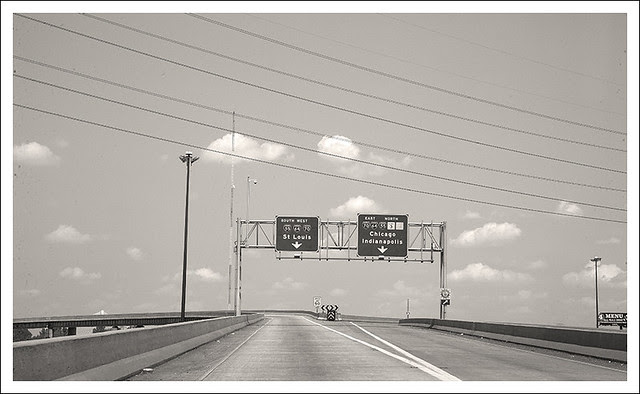 Getting on and getting off the main highway viaduct over the Mississippi, known locally as the Poplar Street Bridge. The direction is from Illinois to Missouri.

This blog promises the occasional rant, and they are very occasional indeed. But there can be the occasional rave. Our wonderful little summer opera company, Union Avenue Opera, is doing an ambitious Ring Cycle over four years. It's a "reduced" version for small companies and houses (UAO plays in a church with a semicircular auditorium and good acoustics). This summer's offering is Die Walküre, which we attended last night. O M G. This was the most intense, brilliant performance on the musical stage this town has seen since I don't know when. The long, tender final scene with Brünnhilde and Wotan actually brought tears to these cynical old eyes. We're going back again next weekend. If you're around The Lou and you like opera, you gotta catch this one. St. Louis Post-Dispatch review here. 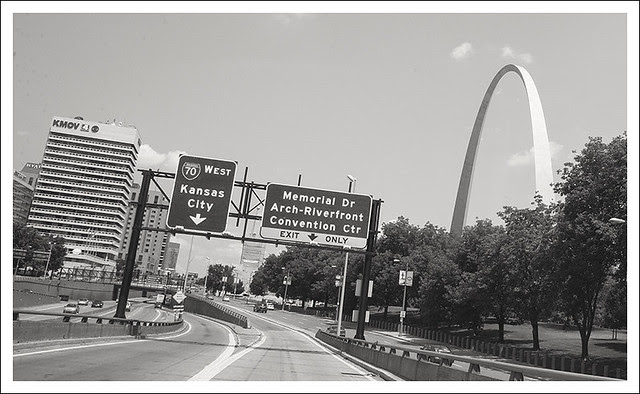 Well in that case, I wish I was on those roads right now...

You are right about Die Walkurie. If you go to our www.Viva la Voyage travel photo site and either scroll back to the June 30 post or click on the index label for France, you will see photos from the Paris Opera's production of Die Walkerie.

Of course we did not take photos during the performace, but I took out my camera during the curtain calls. It was the opposite in scale from the production that you saw. The orchestration even included 6 harps.

I lived in St. Lous during the construction of the Poplar Street Bridge in the 1960's. As I recall, it was delayed or the costs were increased because two unions had a dispute over which union would apply the epoxy to the bridge.

I like the effect of doing these in black and white.

Glad you enjoyed the opera.

My mother loved the opera, more the Italian stuff, but she also loved Wagner's Ring Cycle.

I haven't seen their "Die Walkurie" yet, but their "Madama Butterfly" earlier this summer was superb.

We were out of town when Butterfly was on. However, I'm kind of burned out on it. Beautiful music but I just can't take all that cruelty any more.

Sounds brilliant Bob..even in it's 'reduced state' quote from review :) and a bonus shot of the Arch thrown in, nice :))