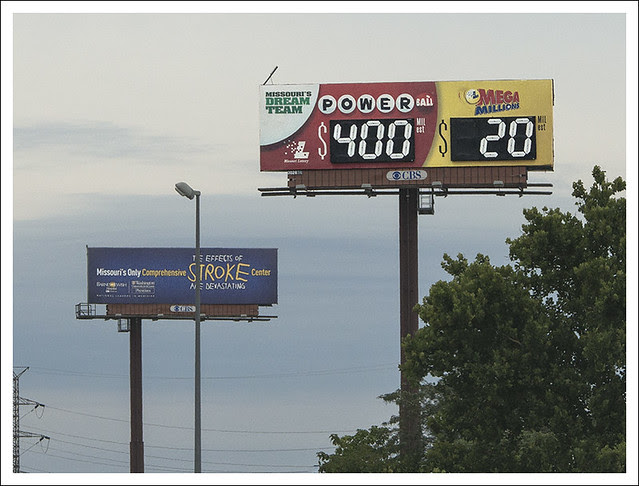 There is no national lottery in the U.S., unlike most of Europe. But 44 of our states have one, plus the District of Columbia, Puerto Rico and the U.S. Virgin Islands. An American variation is that groups of states have joint lotteries, making the jackpots much higher. Powerball and Mega Millions are the big ones.

This sign tells us that the Powerball jackpot is up to $400 million. That creates frenzy and the amount can rise quickly. Of course, your chances of winning are less than the odds of being hit by lightning X dying in a commercial airplane crash X being thrown into an active volcano by malicious Mesoamerican priests. Plus they cheat here: if you win you don't get that amount of money. The $400 mil is the sum of annuity payments over 20 years. If you want all the money now you get much less. Plus it's taxable. Some people call lotteries a tax on the stupid.

The second sign is for a local hospital, actually a very good one. I find it appalling that American hospitals - and sometimes individual doctors - feel the need to advertise and are permitted to do so. Guess who pays the marketing costs in the end. Another aspect of American healthcare, the most screwed up in the industrialized world.
Posted by Bob Crowe at 12:01 AM

I've never played in the lottery and am glad that no medical profession is allowed to advertise!

I have always said that you have better chances at robbing a bank and getting away with it than winning the lottery.

I've heard lotteries called a tax on the statistically challenged.

I won money in the powerball once..a whopping $7. Took me about 5 years to net back out to zero. I wonder if buying a lottery ticket keeps lightning away. I wonder if I could convince one of those lottery players of that...

You need to win that lottery to afford a stay in the hospital.

I find it a shame that there are people so averse to universal health care that they go out of their way to sabotage any effort in that direction.

I find it obscene that a diagnosis of cancer in a family can wipe them out financially without a medical plan. It is a screwed up system... and makes me glad to be on this side of the border.

I bought some Poewrball tickets today. I consider them an investment in imagination. For two dollars, I get to spend a few days dreaming about what I would do if I won. Buy or rent in Paris? Or maybe San Francisco? Then again, a villa in Tuscany would be good.

I do the same as Jack, one ticket a week, a couple of dollars, you just never know :))